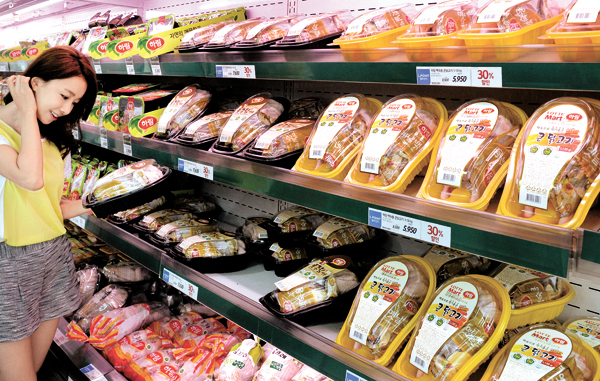 A consumer looking at ingredients for samgyetang at the Lotte Mart in Seoul on Sunday. [NEWSIS]

The summer sales season at department stores has been extended. To the delight of the nation’s leading retailers, last week saw a decided upturn in sales and more promotions that could attract consumers’ eyes. Most department stores run summer sales for about a month, but after consumers stayed home to escape the MERS virus, the sale period was shortened to two weeks. The results may have been surprising; sales were 3 to 4 percent up from last year’s receipts as customers seemed to have been tempted by larger price cuts.

Lotte Department Store is focusing on luxury furs; mink jackets and other coats are on sale at up to 80 percent off until July 19. Mink jackets by eight designers, including Jindo and Keunhwa, are priced at 990,000 won ($875). In its Gangnam store, Lotte offers a 70 percent discount on 10 men’s apparel brands.

The sales at Hyundai and Shinsegae ended Sunday, but they immediately started a second round. From Monday to next Sunday, Hyundai will have a “resort fashion week” in its Apgujeong-dong store in southern Seoul. It has also cut prices by 60 percent on vacation equipment, including bathing suits and camping tools, at its Samseong-dong store from Monday to Thursday. “We are trying to provide many different promotions that targeted specific age groups,” said Kwon Tae-jin, a spokesman of Hyundai Department Store. “We expect these promotions to make consumers open their wallets. We have had a hard time attracting consumers in the past few weeks due to the MERS virus, but expect to get out of the terrible shadow of the disease.”

Shinsegae has crunched some data, it said, and is reacting to its findings. The company said that consumers in their 40s and 50s prefer shopping on weekdays while those in their 20s and 30s want to do so on weekends. Reflecting these preferences, Shinsegae will offer a 50 percent discount on young casual apparel from Friday to Sunday.

It is also good news that chobok, the beginning of the summer heat according to the traditional Korean calendar, begins on Monday, not only for department stores but also for restaurants serving duck and chicken dishes. “The average sales during this period generally rise by 20 to 30 percent,” said Gwak Sung-kwon, a spokesman for the chicken restaurant franchise BBQ.

Chicken has been always a best-seller during hot weather. Halim, a chicken meat producer, said it has been producing about 1.2 million chicken pieces per day since the beginning of July. The company said it generally processes about 500,000 at other times of the year. As chobok approached, the Lotte Hotel in central Seoul is offering special dishes to attract local diners. They include haeshintang, a dish of chicken, cold noodles and ginseng.

The sale of duck meat is also increasing. According to E-Mart, the nation’s biggest retail chain, duck sales have increased 48 percent in the first half this year compared to a year ago. The meat is said by Koreans to cool down people’s bodies. “Many dishes have been introduced lately that combine duck meat and other stamina food, including, eel, abalone and sea cucumber,” said a spokesman for Dahyang, a duck restaurant franchise.