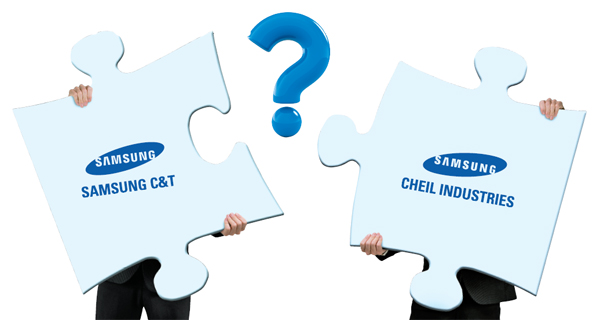 Friday is a momentous day for the Samsung Group. Samsung C&T shareholders will vote on its fate ? and essentially the fate of the whole conglomerate and determine whether they approve its merger with Cheil Industries, the de facto holding company of Samsung Group.

So why does this seemingly strange marriage between a construction to trading company with an amusement park to fashion house operator bear any significance on Samsung Group’s future?

Mostly it’s that Samsung Group, the nation’s largest conglomerate with 67 companies under its umbrella, is controlled by the powerful Lee family via a complex web of cross-shareholding.

Although Cheil has nothing to do with financial businesses on paper, it acts essentially like a financial holding company, controlling a significant stake in Samsung Life Insurance.

The merger between Samsung C&T and Cheil is certain to help the Lee family exert more influence over Samsung Electronics and is seen as a necessary step as the conglomerate prepares to make a generational change from the now-hospitalized Lee Kun-hee to his 47-year old son.

Forces that oppose the merger between the two appear to understand this part of the story.

“Elliott understands and is supportive of the need to restructure Samsung Group in connection with the potential succession of control over it,” said Elliott Associates in a presentation last month. The hedge fund, led by Paul Elliott Singer, owns a 7 percent stake in Samsung C&T.

But the problem, to Elliott and others, are the terms of the merger between the two. 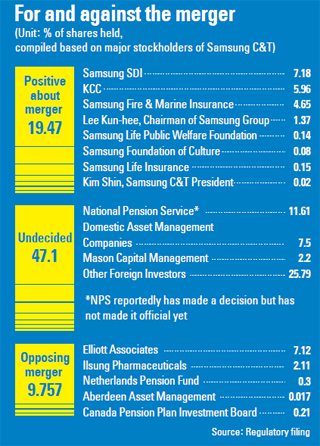 Cheil is offering 0.35 shares for each Samsung C&T share in an all-stock buyout, valuing C&T at about 8.9 trillion won according to market observers.

So it appears that Samsung C&T shareholders are getting less in this merger than the value of the shares owned by the company, and that is before considering its other assets such as properties, facilities and businesses that Samsung C&T currently operates.

The U.S. hedge fund also claims that Samsung C&T shares have been undervalued despite its position as a leading engineering and construction company, while Cheil’s shares are extremely overvalued.

Cheil shares trade at around 4.5 times book value, while Samsung C&T’s price-to-book value ratio is about 0.7.

Criticism of the allegedly “unfair merger” has weighed on Samsung C&T’s shares ever since Cheil’s initial public offering, while expectations of a potential windfall boosted Cheil’s shares.

“We believe [Samsung C&T] stock currently trades at a steep discount to net asset value due to market concerns about Samsung C&T’s potential merger with Cheil Industries,” the Japanese financial holding company Nomura said in a report earlier this year before the merger was announced.

So the all stock-buyout has been, in the eyes of some, an unfair game from the beginning.

Samsung C&T says its merger with Cheil is perfectly legal in accordance with Korea’s capital markets law, and that the merger will help bring out the best in each company. It appears to be correct in that legal assertion. 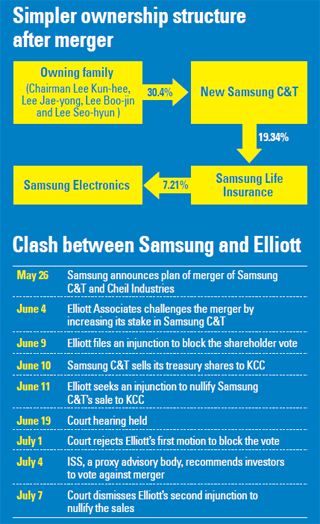 The concept here is that the market will automatically determine what the company is really worth, but the problem with that faith in the market is that speculations about an “unfair” merger has inflated Cheil’s share prices while deflating those of Samsung C&T.

In explaining the rationale for the merger, Cheil Industries said that in the merger, both companies could combine their competitive advantages, thereby securing opportunities for higher growth. Construction and trading businesses can be expanded, as can fashion, food and beverages and bio-related operations. Cheil has also outlined ambitious sales targets and profit margins, arguing that the merged company will have 60 trillion won in sales by 2020 and 4 trillion won in pre-tax profits.

In an attempt to appease shareholders, it has also promised a 30 percent dividend, estimating that the dividend per share will amount to 4,800 per share by 2020, 12 times its 2014 dividend of 400 won. The company has also promised to set up a corporate governance committee.

Elliott’s attempts to block Samsung C&T’s shareholder meeting and stop KCC Corporation, a building materials company, from using the Samsung C&T’s treasury shares it bought on June 11 to vote on the merger did not go well. A Seoul court has rejected both requests for injunctions.

KCC is known as having close links to the Lee family. After its treasury share purchase, it has a 6-percent stake in Samsung C&T.

Elliott is not alone in its stance. Other foreign investors, including Aberdeen Asset Management and APG Groep NV, the world’s second-largest pension fund, have sided with the U.S. fund. Earlier this month, Institutional Shareholder Services (ISS) and Glass Lewis, influential proxy advisory firms, both issued reports advising investors to reject the merger.

“[The] combination of Samsung C&T’s undervaluation and Cheil Industries’ overvaluation significantly disadvantages Samsung C&T shareholders,” ISS said, adding that potential synergies, if any, did little to compensate for the significant undervaluation implied by the exchange ratio. It also criticized Samsung C&T’s sale of treasury shares to the KCC, calling it “a blatant effort to overpower, rather than address, shareholder concerns over valuation.”

But experts who do support the merger stress the deal’s legitimacy.

“We recommend a vote for the Samsung C&T and Cheil merger transaction. First, the deal is perfectly lawful and legal,” Daishin Economic Research Institutes said in a report earlier this month. It also said valuations appear to be fair, since return on equity, which is closely related to the price-to-book ratio, is 2.2 percent for Samsung C&T and 9.9 percent for Cheil Industries.

Hana Daetoo Securities also said that the ISS overestimated the enterprise value of Samsung C&T when making its arguments about the firm’s undervaluation.

“ISS was hugely optimistic about Samsung C&T’s enterprise value,” Hana Daetoo’s Chae Sang-wook said, adding that the service’s estimate of the firm’s construction and trading value, 6.18 trillion won, was about 88 percent higher than its own estimate of 3.3 trillion won.

Hana Daetoo added that Samsung C&T’s current share price reflected a practical assessment of the firm’s current operations; the profitability of its businesses has deteriorated steadily in recent years after a sharp decline in foreign orders and a slump in shipbuilding, chemicals and crude oil businesses.

Some interested parties also complain that the ISS didn’t take into account that Samsung C&T is not the only heavily discounted listed company in Korea. The Korean stock market is influenced by the “Korea discount,” shorthand for the way many Korean stocks are valued taking into account geopolitical risks, domestic business practices and its excessive dependence on exports, among other factors.

“Elliott’s argument that the merger should have been discussed when Samsung C&T’s price-to-book ratio was at least 1 is not rational, given the nature of the Korean stock market,” said on financial trader.

“Our market overall is in need of a major upgrade. The construction sector, in particular, is heavily discounted,” he added.

The average price-to-book figure for listed construction firms in the past 12 years has hovered at about 1.14.

Experts and scholars alike question the credibility of proxy advisers like ISS.

“Funds like Elliott specialize in picking out companies with a vulnerable governance structure and use both legal means and public propaganda to put pressure on companies,” said Lee Ji-hwan, a professor at the Korea Advanced Institute of Science and Technology. He said such “vulture funds” normally make huge investments in companies that are likely to merge or issue new shares and use their stock holdings get quick profits.

Ahead of the vote on Friday, market insiders are busily tallying up how much support each side has built for what may be the biggest proxy fight the country has seen in many years.

Samsung C&T is said to have supporters whose combined stake is about 19 percent, including that of Samsung SDI, KCC, Samsung Fire & Marine Insurance and a handful of domestic asset managers. Samsung C&T needs to amass at least two-thirds of votes from shareholders in attendance, or at least that of one-third of the total shares outstanding.

Experts say a decision by the National Pension Service, which controls 11.6 percent of C&T, will probably tip the balance. At a meeting on Friday, the pension fund said it has made a decision on how to vote its shares, but did not announce what that decision was. Speculations rose however that it was likely to vote for the merger amid talks it has internally decided to side with Samsung.

Similar proxy fights may be more frequent in the future; many of Korea’s major conglomerates are undergoing transitions, some to third-generation leadership.

Those who believe founding families should be able to keep a conglomerate in the family are calling for fewer impediments to doing so. Some business lobbying groups and lawmakers want to see bolstered voting rights for management to protect itself from speculators.

“We are not equipped to protect management rights and have thus often fallen victim to speculative capital that preys on that vulnerability,” said Lee Seung-cheol, a senior executive at the Federation of Korean Industries, which represents Korea’s major groups.

In the United States, for example, Facebook founder Mark Zuckerberg and his co-founders own Class B common stocks that entitle them to 10 votes, compared with 1 vote for outside investors who hold Class A shares of the common stock.

Rep. Park Young-sun has also called for new legislation, saying there are only limited ways to restrict foreign investments, which is allowed only where harm to public health or the environment are involved.

Park proposed that restrictions should also be imposed on investments that “pose obstacles to the smooth management of the national economy.”

“To my knowledge, the United States has a similar legal framework where investments by foreign capital can be stopped or restricted when a committee determines that they interferes with national security,” she said in a statement.

“We should also take into consideration the repercussions on the national economy when foreign investors try to buy or build stakes in companies that are critical to our economy.”