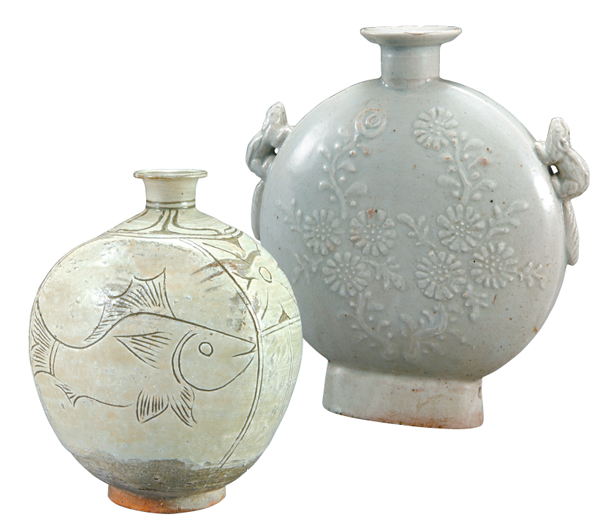 Left: A 15th-century buncheong sagi flat bottle with a fish design. Right: A porcelain bottle from the 16th or 17th century with squirrel-shaped handles. Provided by the organizers

Sure we’ve all seen ceramic bottles from ancient Korea, like the famous porcelain pieces from the Joseon Dynasty (1392-1910) and equally famous celadon items from the Goryeo Dynasty (918-1392).

But how often have you seen a group of several flat bottles and studied how this specific type evolved over the years?

The exhibition currently underway at the Sinsa-dong branch of the Horim Museum takes a new approach to ceramic bottles, displaying a series of only flat bottles mostly from its own collection. Of the 70 flat bottles on display, half of them have never been shown to the public before.

The first section of the exhibition, titled “Harmony of Lines and Surface, Flat Bottle,” is solely dedicated to flat bottles that are buncheong sagi, or buncheong ceramics, and the section is bound to appeal to fans of the buncheong genre, known for free-style and even childlike illustrations.

“The most interesting thing about buncheong sagi flat bottles is that none of them are the same shape,” Ryu Jin-hyun, a senior curator at the museum, told journalists during a press viewing on Tuesday. “This is different from porcelain flat bottles, which are usually standardized and uniform in shape.”

In fact, when buncheong sagi was popular during the first 200 years of Joseon, the royal families and aristocrats owned porcelain. But commoners could not afford this type of pottery, so they made buncheong instead, attempting to make it look like porcelain by coating the surface in white slip. They would then carve drawings into the coating.

The silhouette is rougher and the coating is coarser compared to porcelain. But the illustrations are often so much freer and offbeat, so there have been many exhibitions dedicated exclusively to this pottery of laymen both in Korea and abroad.

Buncheong sagi flat bottles often feature designs depicting peonies, a symbol of wealth, according to curators. That’s why one 15th-century piece featuring a fish design is considered so rare and precious.

“Usually, it’s considered that the more fish a bottle has, the higher its worth,” Ryu said.

“The idea for flat bottles came from China, but Korea’s porcelain flat bottles are much simpler than their Chinese counterparts,” Ryu said.

In the early part of Joseon, the most common decorative technique for porcelain flat bottles was sanggam, which involved inlaying pigments into stamped or carved illustrations on the surface. In mid-Joseon, the cheolhwa technique, using an underglaze of iron oxide for decoration, was in fashion. Then in late Joseon, handles in the shapes of animals were attached and yanggak, or embossed carving, was frequently added.

In fact, the evolution in designs on flat bottles reflects the development of all porcelain during the Joseon Dynasty, according to curators.

There is also a small section of the exhibit dedicated to black flat bottles. Historians say that since these pieces have not been found at state-run kilns, they were most likely used by commoners. 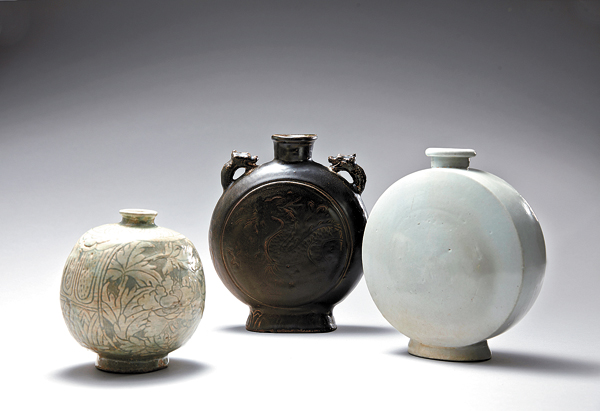