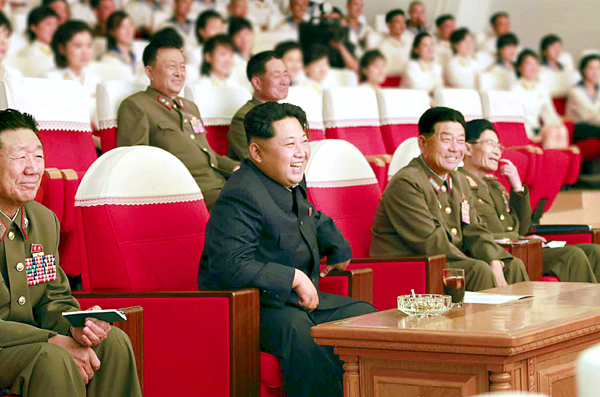 A group of about 10 North Korean soldiers breached the military border into the South on Saturday morning near the border town of Cheorwon, Gangwon, retreating back to the North after warning shots were fired.

“The South Korean military warned the North Korean soldiers via speakers not to come any further after they crossed the Military Demarcation Line (MDL), and then proceeded to fire warning shots,” an official at the Ministry of National Defense said on the condition of anonymity.

The North Korean soldiers, who were armed at the time, returned without firing back.

The incident was the first time that South Korean troops have fired warning shots at the border this year.

The official added that there had been signs that the North Korean Army may be bolstering its reconnaissance and patrols along the 4-kilometer-wide (2-mile-wide) demilitarized zone (DMZ) dividing the two Koreas.

The increase in activity at the border by the North could be related to the defection last month of a 19-year-old North Korean soldier, who entered the South by walking across the DMZ, eventually reaching a guard post in Hwacheon, Gangwon. South Korean authorities did not describe in detail the routes the soldier took, but did say that the 19-year-old had expressed his willingness to defect.

Tensions on the border flared in October when North Korea fired about 10 rounds from an anti-aircraft gun at helium-filled balloons launched by South Korean civic groups that contained leaflets critical of the regime.

In response, the South Korean Army shot about 40 rounds from a K2 machine gun near Yeoncheon, Gyeonggi, in the direction where rounds from the North were fired. No casualties were reported.

The brief border crossing by the North Korean soldiers on Saturday came on the same day North Korea officially confirmed Pak Yong-sik as its new defense minister. He apparently took the post after his predecessor, Hyon Yong-chol, was purged.

The state-run Korean Central News Agency reported on Saturday that Pak Yong-sik, as the minister of the People’s Armed Forces, had received a gift from the head of the Laotian Defense Ministry upon his visit to Pyongyang.

South Korea’s National Intelligence Service reported on Hyon’s purge in May and his subsequent execution on treason charges. North Korea has neither acknowledged nor denied the spy agency’s report on Hyon’s ouster or his execution. However, he has not been seen in public since May.

Hyon was formerly the second-most powerful military man in North Korea after Hwang Pyong-so, the director of the General Bureau of the North Korean Army.