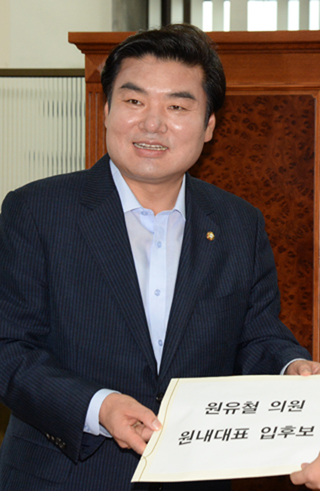 The ruling party is scheduled to name Rep. Won Yoo-chul as its new floor leader on Tuesday, as the former chief policymaker registered his bid for the post on Sunday as the sole candidate.

The Saenuri Party was to select its new floor leader at the general assembly of lawmakers on Tuesday. The vacancy was created after Rep. Yoo Seong-min resigned from the post in the aftermath of a feud with President Park Geun-hye.

Saenuri leaders then decided that the new floor leader would be selected through a consensus, not an election, worried that a competition would only fuel the factionalist split started within the party after the confrontation between Yoo and Park.

Anticipation grew last week that Won would seek to become the next floor leader.

By the 5 p.m. registration deadline on Sunday, no other lawmaker had tendered his or her bid, making Won the sole candidate for the post.

Won, a 52-year-old four-term lawmaker representing Pyeongtaek, Gyeonggi, was elected chief policymaker in February as Yoo’s running mate, but stepped down from the post in accordance with the party’s constitution after Yoo resigned.

Won chose Rep. Kim Jung-hoon as his running mate to become the next chief policymaker.

“Since I am representing a district in the capital region, many lawmakers recommended that the chief policymaker should be someone from Gyeongsang,” Won said after he registered the application. “Kim is the former chairman of the National Policy Committee, and he is known to be a man with drive. I thought he was the best candidate to push forward the reform agendas of the Park Geun-hye administration through smooth communication and cooperation with the Blue House.”

Asked how he will mend the broken ties between the ruling party and the Blue House, Won said he would make public his plan after his appointment as floor leader was confirmed Tuesday at the general assembly of Saenuri lawmakers.

While Won is not a devoted Park follower, he is known for his moderate and neutral stance as well as his humble character. He has worked mainly on defense, foreign and unification issues.

Ahead of the 1997 presidential election, Won had left the Grand National Party, the predecessor to the Saenuri Party, to support the bid by Rhee In-je.

During the Kim Dae-jung administration, he became a member of Kim’s party, due to a political merger between Rhee and Kim.

After suffering a defeat in the 2002 general election, he returned to the Grand National Party.