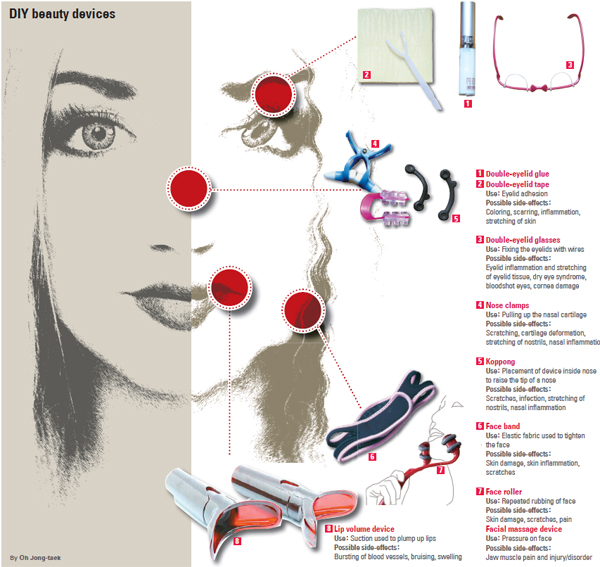 After her parents flatly refused to pay for a nose job, a 17-year-old high school student named Kim turned to the online community for tips on how to change the shape of her nose without surgery.

Netizens suggested that Kim use a so-called koppong, a small plastic device shaped like the letter “C” that is inserted into a nostril to push up the tip of the nose.

However, within a week, Kim had to stop using the koppong. The device tore up the inside of her nose, causing it to bleed, and it induced so much pain that she couldn’t even touch her nose.

“The inside of the nose is very sensitive, and contains mucous membranes and many blood vessels. Putting foreign substances into the nose can cause infections and inflame blood vessels,” explained Choi Gyu-yeong, a doctor at the Ear, Nose and Throat Department at Hallym University Kangnam Sacred Heart Hospital in southern Seoul.

“The condition can worsen and cause symptoms related to nasal inflammation or congestion,” Choi added.

In fact, there are many devices on the market that mimic the effects of cosmetic surgery and they are particularly popular with teenagers. They include tape or glasses for creating double-eyelids, small clamps for raising the tip of the nose, a device to create voluminous lips and rollers and bands for shaping the face.

Most of these products - marketed as auto-cosmetic surgery tools - are commercial products and not inspected for safety. Experts warn they could cause significant side effects.

“Teenagers content with the temporary effects of these products soon suffer from their side effects,” said Kweon Young-dae, a member of the Korean Association of Plastic Surgeons.

One example is the tape used to create double-eyelids, the term for Western-style eyelids with a crease or fold. Tape is used in conjunction with a plastic, Y-shaped stick that pushes and folds back the eyelid. The products can inflame the skin when used daily or for extended periods of time.

“Continually irritating the skin by applying adhesives can stretch out the skin, and some [skin] cells will die and leave a scar,” said Jung Jae-a, a doctor at the Department of Plastic and Reconstructive Surgery at Korea University Guro Hospital in southwestern Seoul.

The advertisements for these contraptions claim they can achieve a “five-minute miracle” and “cosmetic surgery without the surgery.” Their prices are also very friendly for young adults, ranging from 3,000 won to 15,000 won.

It’s estimated that over the course of five years, sales of auto cosmetic surgery tools, including related makeup items, have increased over 40 percent.

But products like the “five-minute miracle” double-eyelid glasses can be severely detrimental to one’s health.

The device is an eyeglass frame with two curved plastic wires in the place of lenses. They press the eyelids and force them to fold back onto themselves. Advertisements for the product say that wearing these for five minutes a day will create double-eyelids.

But because the plastic pieces force the eyes open, that’s five minutes a day of no blinking. Blinking is essential to keeping the eyes moist and preventing dry eye syndrome. The glasses also cause the eyelids to lose their elasticity and can induce blepharochalasis, or inflammation of the eyelid tissue that causes the stretching and subsequent atrophy of the eyelids.

“No matter how long one wears those glasses, one will never be able to create permanent double-eyelids,” said Kang Min-ho, a doctor at the Department of Ophthalmology at Hanyang University Guri Hospital in Guri, Gyeonggi. “The pressure will only irritate and damage the eyeball.”

The plastic wires on the glasses are thin enough to stab the eyeball, which can happen in the process of getting the wires on the eyelids. If the wires graze the corneas frequently, they can scratch the epithelial tissue covering the front of the cornea.

“Damage to the corneal epithelium can cause severe pain,” said Kang. “One should take care [to avoid it] as it can also increase the likelihood of bacterial infection.”

Yet another device, the nose clamp, is supposed to raise the tip of the nose by pulling up the nasal cartilage.

Unfortunately, continuous application of pressure through these clamps can warp nasal bones and cartilage. This is particularly dangerous for youths in their teens whose bodies are still maturing.

Koppong manufacturers claim that their product can change the shape of the nose in a myriad of ways. The user should wear the two to three centimeter (0.7 to 1.1 inch) pieces of plastic in the nose all day. But medical experts are negative about the devices.

“Frequent use of the koppong stretches out the skin on nostrils and can actually cause the skin to stretch in strange ways,” warned Choi. “There’s even the possibility of accidentally inhaling the koppong.”

A tool for plumping up the lips has also come on the market. The device applies suction to the lips, causing them to swell up.

However, minute blood vessels in the lips can be damaged with intense pressure. Blood vessels can explode and cause bruising.

One must also be cautious with bands, rollers or other devices that claim to reshape the jawline. These can cause jaw pain and abrade the skin.

“Disruptions to facial blood circulation can cause inflammation and pain,” said Kim Beom-joon, a doctor at the Department of Dermatology at Chung-ang University Hospital in Dongjak District, southern Seoul.

Most of these products do not list any possible side-effects. Experts advise purchasing only devices and cosmetics that have been approved for household use. It is also best to strictly follow the directions for use of such products.

“Prior to purchasing anything, one should confirm if [the product] is appropriate for the intended goal and if it has been tested for safety,” cautioned Kim Beom-joon.