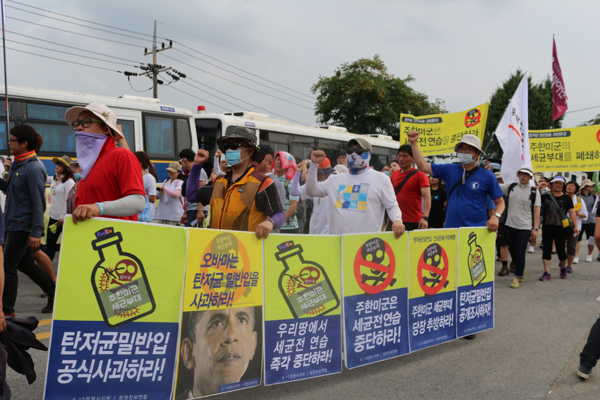 Members of left-leaning civic groups hold a rally on Saturday in front of the U.S. Osan Air Base in Gyeonggi to protest Washington’s accidental delivery of live anthrax samples to Korea. Protesters demanded an official apology from the United States Forces Korea.[NEWSIS]

The South Korean government has formed a joint investigative body with the United States to look into an accidental live anthrax delivery to a U.S. military base in South Korea, the Foreign Affairs Ministry said on Sunday.

The formation of the Joint Working Group (JWG), composed of officials from the Korean military, the Foreign Affairs Ministry and the United States Forces Korea (USFK) under the Korea-U.S. Status of Forces Agreement Joint Committee, followed a revelation by the Pentagon in May that 24 laboratories in 11 U.S. states, as well as Korea and Australia, were likely to have received live anthrax samples.

Most forms of anthrax are deadly, and the agent can be used as a fatal biological weapon.

The Foreign Affairs Ministry announced that Seoul established the JWG on Saturday to investigate the accidental delivery at the Osan U.S. military base in Gyeonggi, 48 kilometers (30 miles) south of Seoul, and work on measures to prevent similar incidents.

“The government views the formation of the JWG as a sign of resolve shared by Korea and the U.S. that the two must protect the safety of South Koreans and alleviate public concern [regarding the anthrax delivery],” the ministry said, adding that it will review preventive measures and safety protocols as part of an investigation.

The government said the investigative body will work to bolster information-sharing measures between Seoul and Washington with regards to future military exercises by the USFK, and perform an on-site inspection at a laboratory located at the Osan military base in the coming days as part of a joint investigation.

Regarding news reports that live anthrax samples were delivered to the Osan base by commercial shipping companies with little precaution, a ministry official said the U.S. Department of Defense gave an order to dispose of the material at an isolated laboratory at the Osan Air Base, as the fatal virus “could have been alive.”

“[The USFK] immediately disposed of the samples upon receiving the order without checking whether the concerned anthrax was alive or not,” the official said, speaking on the condition of anonymity.

The scandal has raised eyebrows over the strictness of U.S. management and the extent to which it is sharing relevant information with Seoul.

Criticism on the accidental shipment prompted American Defense Secretary Ashton Carter to apologize to his Korean counterpart Han Min-koo in May on the sidelines of the Asia Security Summit.

Anthrax is a disease caused by the bacterium Bacillus anthracis and has been identified as the biological agent used in some terrorist attacks.

People become infected with anthrax when spores make their way into the body by either breathing them in, eating food or drinking water contaminated with spores or getting spores in a cut or scrape in the skin.

The disease is not contagious in the same way people might catch the common cold or the flu.