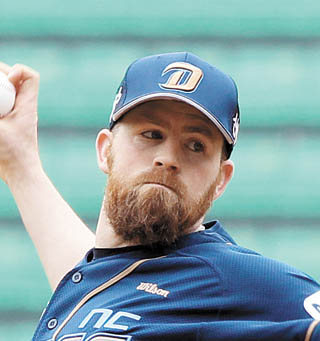 On Thursday, NC Dinos starting pitcher Eric Hacker collected his 10th win of the season after shutting down the KT Wiz for six innings despite allowing seven hits and four walks as the Dinos blanked the visitors 11-0.

This made Hacker the team’s first pitcher to rack up 10 wins this season. It was also a personal best for a season, his first time with double-digit wins in his KBO career, which began in 2013. The 32-year-old American, who once played for the Pittsburgh Pirates, Minnesota Twins and San Francisco Giants, seemed to have an unlucky charm in Korea, often suffering from a lack of team hitting and fielding support when he was on the mound.

In 2013, the right-hander had 16 quality starts, completing at least six innings and allowing no more than three runs, but he got only four wins for his efforts. He also lost three complete games. Last year, Hacker had eight wins through June, but in his last 17 starts his record was a dismal 0-8.

He changed his uniform name from “Eric” to “Hacker” this season and his luck seems to have changed. He is now 10-3 with a 3.13 ERA, sitting third in wins and second in ERA in the league.

He is the league leader in walks plus hits per inning pitched, allowing an average of only 1.1 base runners per inning.