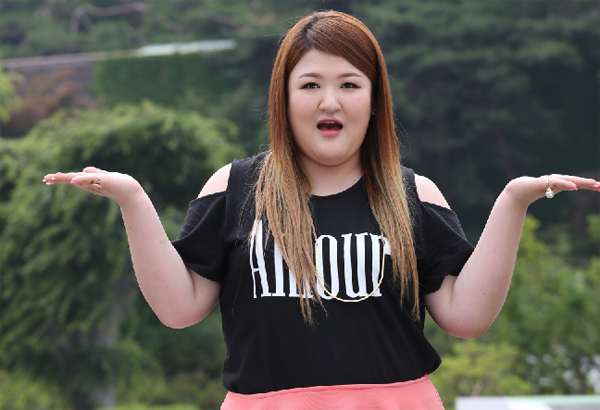 Korea’s comedy scene has seen a slew of female stars in recent years.

Among them, Lee Gook-ju certainly stands out, not only because of her plus-size figure, but also because of how she uses it as a source of humor onstage.

Thanks to many of the buzzwords she has created, all of which are related to eating, Lee is one of the most sought-after comedians to star in TV commercials, comedy programs and variety shows.

In a recent interview with Ilgan Sports, an affiliate of the Korea JoongAng Daily, the 29-year-old entertainer said that she feels “grateful” for her current status, after enduring eight years of working underground.

While admitting to feeling the inevitable pressure about her next move, Lee said she is going to focus on comedy and not think about anything else for a while.

Q. How do you feel about your newfound stardom?

A. I think staying in the middle is the hardest thing. When I was an unknown comedian, I desperately wanted to get my name known to the public. And now, I feel kind of uncomfortable with the abundant attention given to me.

Your character on TV is very outspoken about your cravings for food, which isn’t run-of-the-mill for a female. How do you feel about it?

I see Internet comments that condemn me for being too fat. I think to myself if it is right to continue doing this. But even if I lose weight, that is not what the public wants. So these days, I have decided to do as I want, not being pushed around by what others think of me. If I feel like I have to lose weight because of health issues, I will do it then.

You frequently appear on food-related shows as a guest. Is there any pressure about having to eat a lot?

Yes, believe it or not. Since my image is all about eating well, I have to unconditionally react to all types of food by saying it is very delicious. It is not like I don’t like eating, but I don’t want people to get disappointed with me by saying that I don’t eat as much as they had expected.

Despite all the hardships, you must have earned a lot by appearing in more than 10 TV commercials last year, not to mention other variety programs. How do you manage your income?

A lot of people ask me how much I have earned. Of course, compared to the year before, I earn as much as 10 or 20 times more. But I don’t spend it easily because I have been through hard times. I’ve collected every penny of my income, and recently I bought a building in Myeonmok-dong [eastern Seoul] where I was born. It feels very worthwhile seeing my father being very happy about it. He sends me photos of the building taken on his way to work.

What kind of programs do you want to do in the future?

I want to do something that has to do with cooking, not eating. I want to share my stories and cook at the same time, showing people that I do more than eat. It would be very nice to have male chefs beside me, but having a female chef would be the best scenario because they are hardly seen on TV these days.