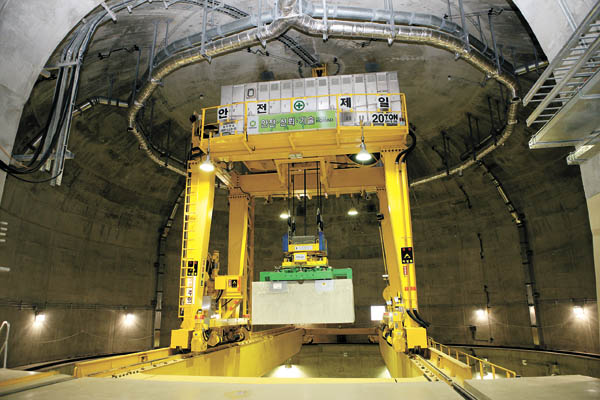 A crane moves a concrete box filled with 16 drums of low and intermediate-level radioactive waste to place them inside a 50-meter underground silo at the Gyeongju radioactive waste disposal site in North Gyeongsang. Provided by Korad

The first burial ceremony for low-level radioactive waste was held on Monday afternoon at the Gyeongju Nuclear Waste Disposal Site. The site was completed in June 2014; it is located in Yangbuk-myeon, a small town near the Wolseong Nuclear Power Complex and about an hour’s drive from the center of Gyeongju.

About 50 nuclear experts and local residents attended the ceremony in the tunnel dug 80 meters (262 feet) below the ground.

After a 15-minute bus ride through the paved tunnel, visitors can see six huge holes 50 meters deep - called silos - extending downward to 150 meters below ground level. Each silo has space to store 17,000 drums, each with 200 liters of radioactive waste.

Sixteen drums are carried at a time to a concrete box that prevents any radioactive leaks. A crane then transfers the huge box, weighing up to 7 tons, and moves it into the silo.

The Korea Radioactive Waste Agency (Korad), a public organization run by the Ministry of Trade, Industry and Energy, plans to bury 3,008 drums by the end of this year. The disposal site has about 5,000 drums waiting to be moved inside from above-ground temporary storage.

“Because safety is the utmost significant factor for the workers here, the crane is designed to move so slowly that it takes nearly four hours to dispose of one concrete box of 16 drums,” said Oh Haeng-yeob, chief of the waste testing department at Korad.

“We designed the disposal tunnel and silos to be technically safe for 1,400 years,” Oh said. Korad is responsible for regular tests of underground water and soil for radioactivity for the next 100 years.

If the Gori 1 reactor - which the government last month decided to permanently close - is actually dismantled and other older nuclear reactor units are also retired, the amount of intermediate-level radioactive waste will increase dramatically. The site does not handle the worst of the worst of radioactive waste, for which there is still no permanent storage site or disposal plans. That high-level waste is stored within the reactor containment buildings at each site.

Because the new burial site for the less dangerous material is located near the Wolseong complex, no residents live within 900 meters of the facility.

On average, 2,100 drums of low and intermediate-level waste is produced annually at a nuclear power complex. The amount differs depending on the number of operating reactors.

According to Korad, since 1978 Korea has amassed nearly 130,000 drums of such waste, almost all of it stored at reactor sites. “From a technical point of view, it is safe to live right next to this disposal site where low level waste is buried,” said a Korad representative. “Even if you live here a year, your exposure to radiation is equivalent to that from an X-ray.”

Kim Sook-nam has lived in Yangbuk-myeon for most of her life and has witnessed the long-running conflict and negotiations about the facility. She says public opinion has changed greatly in the last few years after people watched the tunnel being built.

“Most residents used to cast cold eyes on the disposal site even until a few years ago,” Kim said, “because we didn’t know the technical details of the safety measures, only hearing rumors that active [geological] faults have been found near the site, water dripping inside the construction sites, and some residents being diagnosed with thyroid cancer. After visiting the disposal tunnels several times, we feel more relieved.”

Gyeongju was one of 250 potential sites for the waste dump because of its stable underground geology. Others were near Uljin, Buan, Gunsan and Samcheok in Gangwon. Korea conducted 10 rounds of selection process over the last 20 years. At first, the government wanted to select a site that could store both high-level waste like spent nuclear fuel and lower-level products. That plan generated resident revolts for 18 years. Acknowledging the public’s opinion, the government said in 2004 that it would choose a site only for low and intermediate waste. The decision sped the site selection process, which ended in 2005 with Gyeongju declared the best choice.

Monday’s disposal ceremony was only the beginning of Korea’s moves to handle the disposal problems accompanying nuclear power plants and nuclear research. The larger problem, what to do with waste that is much more highly irradiated and dangerous, is still unsolved and is likely to remain so for some time to come.

“We accepted the disposal site only because the government promised that only low and intermediate-level nuclear waste, which has little impact on our health, will be buried here,” Kim, the nearby resident, commented. “If it stored the highly-radioactive material, I don’t think our residents will be able to accept and live with that.”

Oh of Korad also emphasized that it is technically impossible to extend this disposal facility to allow the burial of spent nuclear fuel. “The disposal facility here shouldn’t be touched anymore. Another site should be drilled to deal with spent fuel,” he said flatly.At the nearby Wolseong Nuclear Power Complex, a new nuclear reactor unit, Sinwolseong 2, started test operations last Wednesday. It is the nation’s 24th commercial nuclear reactor, and has a capacity of 1 million kilowatts. The light water reactor will begin commercial operation at the end of this month.