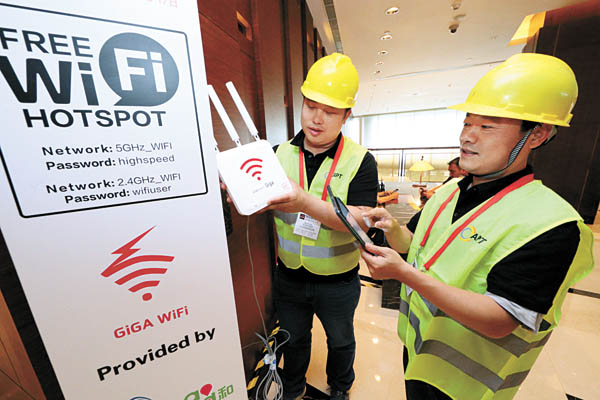 Three leading telecom companies will present a glimpse into what it’s like to live in a world with the next-generation wireless connectivity 5G at the 2015 Shanghai Mobile World Congress from July 15 to 17.

Dubbed GiGA LTE, KT said that the technology can process data up to 15 times faster than the current speeds, with the maximum download speed set at 1.17 gigabits per second.

At this year’s Mobile World Congress in Barcelona, Spain, Hwang delivered a keynote speech for a session known as “The Road to 5G,” outlining how the development of 5G will reshape its business and people’s lives.

He pointed to a driverless car as a machine that can benefit from the advanced wireless network.

A new commerce platform developed by the company will also be on display.

Although SKT did not elaborate on what kind of platform it will be, many believe that it will be part of an initiative announced earlier this year.

In April, SKT said that it will pull resources in a bid to develop a platform designed to provide content tailored to consumers’ interests, integrating e-commerce, communities and content.

A manager of the company said that the commerce platform under the new initiative will deliver an entirely new consumer experience.

“For example, if a consumer is interested in baseball and enthusiastic about a certain team,” said Huh Gwang, manager of SK Telecom at the time, “we will provide him with a package of services that encompasses online shopping malls selling baseball uniforms and memorabilia, online and app-based forums with fellow fans and tour information about where a match is going to be held.”

Meanwhile, LG U+ has set its sights on the advanced voice calling service VoLTE.

Presently, not all phone calls are connected through 4G LTE, as some users still subscribe as 3G customers.

With calls on the 4G network, users can exchange photos and share music simultaneously.

“We have established a technological basis for the VoLTE to be commercialized to the masses,” said Lee Kyung-jae, the director of the communication service division at LG U+.

“We hope that the know-how on the technology can be shared.”