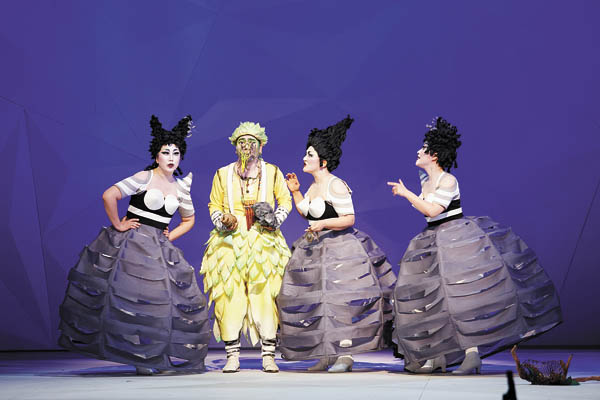 The Korean production of the German opera “The Magic Flute” will start its fiveday run at the Seoul Arts Center from Wednesday. The dialogue will be in Korean while the songs will be sung in German. Provided by SAC

Whereas most operas are considered difficult for young children to understand, the organizers of the upcoming performance of “The Magic Flute,” also known as “Die Zauberflote,” say this opera will be easy to enjoy, even for the young audience.

This Korean production of the German opera, which runs for five days starting Wednesday at the Seoul Arts Center, was written by Mozart and Emanuel Shikaneder. The opera follows the story of Prince Tamino’s journey to rescue Princess Tamina from the alleged villain, Sarastro.

“The story of ‘The Magic Flute’ will appeal to adults and children alike as its fairy-tale plot will stir up children’s imagination while its hidden and profound ideas will raise insightful questions for the adult audience,” said an official from the Soul Arts Center.

Led by conductor Lim Heon-Jeong and director Lee Gyung-jae, the opera will star singers who have been active on international stages including tenor Kim Wu-gyung, soprano Park Hyun-ju and bass Jeon Seung-hyun.

“This opera delivers various values and entertainment through its complex composition and numerous characters,” said director Lee, who is known for directing “Don Giovanni” as well as “The Marriage of Figaro.”

“I intended to portray the elaborate relationships within the work on a simple, empty stage,” Lee said, adding that he will give the stage a “picturesque quality using colorful images and costumes.”

Following the concept of “drawing a picture on stage,” the organizers said in a press statement that the characters of the performance will “each become a brush with a unique color and draw a picture of one’s own.”

According to the Seoul Arts Center, the upcoming show will not be in an adapted form, but will follow the original work in every aspect. In order to emphasize the accessible charm of Singspiel, or German musical drama with both spoken dialogue and songs, the performance’s dialogue will be in Korean with the songs in German.

“The Magic Flute” is the work that the Seoul Arts Center has staged most often since the opening of its opera house in 1993. Although the performance runs for five days only, the show will be filmed and screened as part of the center’s “SAC on Screen” program using full HD and surround sound.