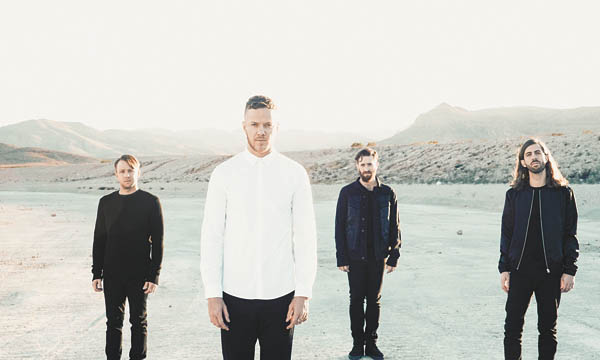 Imagine Dragons, an American alternative rock band, will hold a concert on Aug. 13 at Olympic Hall in southeastern Seoul. Provided by the organizer

Imagine Dragons may be a young band but they’ve already hit it big.

They released their debut album, “Night Visions,” only in 2012, but it didn’t take long for the band to rise to arena status. Their song “Radioactive” featuring rapper Kendrick Lamar is probably their most popular song: The track stayed on the Billboard Hot 100 chart for 87 weeks, the longest of any song in history.

The smash hit also won the Grammy Award for Best Rock Performance, and it recently joined the league of legendary songs like Lady Gaga’s “Bad Romance,” Eminem’s “Not Afraid” and Justin Bieber’s “Baby” by receiving a diamond plaque from the Recording Industry Association of America last week for having sold 7.7 million tracks and streaming more than 366 million times.

The Las Vegas rockers are bringing their song to Seoul next month, along with numerous other hits from their second album, “Smoke + Mirrors,” which they released in February.

Imagine Dragons, consisting of vocalist Dan Reynolds, bassist Ben McKee, guitarist Wayne Sermon and drummer Daniel Platzman, have already claimed their fame in Korea after an electrifying performance during the League of Legends Season 4 World Championship in Seoul last October in front of some 40,000 gaming fans. That’s probably why tickets for their upcoming concert on Aug. 13 at Olympic Park in southeastern Seoul have already sold out.

Ahead of the band’s upcoming visit, the Korea JoongAng Daily interviewed bassist McKee by phone through their local organizer, Live Nation.

Q. Your debut album, “Night Visions,” became a huge success and Imagine Dragons gained instant popularity. What was the driving force behind the spotlight?

A. I mean we were really just focused on making music that we could be proud of and that we enjoy playing. We never knew that we were going to be having the success that we ended up having off of the album. We never had that kind of expectation. We were just writing music, trying to make an album that we would be really proud of for the rest of our lives and to see if people respond to it, that resonated with the people, and people connected with it.

Why do you think “Radioactive” became so popular? The song even set a record of staying on the Billboard Hot 100 chart for 87 weeks, which is the longest of any single. What was your reaction to that?

I mean it was just unbelievable. It wasn’t a song that quickly went up to the chart. It’s not like we released it and all of a sudden it was a No. 1 single. You know, it wasn’t even the first single from our record. It wasn’t a single that we were planning on releasing.

But radio stations started playing it, and fans started downloading it, and it just kind of created its own momentum once it got out there. Then it slowly moved up the chart. It took so much to get there but once it got onto the chart, it stayed up there for so long, it was surreal. We kept on expecting it to start creeping back down. But still I hear it most of the time when I drive my car to town on the local radio station up here in San Francisco, I hear “Radioactive.”

After releasing “Smoke + Mirrors,” the album instantly became No. 1 on the Billboard 200.

It was great. You never know what to expect when you release the second album - everybody talks about sophomore slump. And we were trying not to think about that, we were again just really focused on making music we enjoyed and music that we could play live more than anything.

Experiencing the tour with “Night Visions” made us aware that we needed to be really comfortable with playing the music live and connecting with it. You know a live setting, that’s the way that music is going to live for us. We were focused on making an album that would be fun for us to play, to a crowd, night after night after night.

So you weren’t pressured while working on the second album?

We didn’t really feel pressure while we were creating it. We were not going into the album, trying to duplicate “Radioactive” or duplicate “Night Visions.” I don’t think that we could say exactly what combination of things caused “Night Visions” to connect the people the way that it did. We were just trying to do the same thing we did before, just focus on the songs that we connected with most that felt the most honest.

We also bought a house in Las Vegas and turned it into a recording studio and just lived there for six months. So we got to take a lot of time with each song and experiment a lot with the production on “Smoke + Mirrors” a lot more than we got to on “Night Visions.”

Many of your songs have been used for films, television shows, advertisements and for video games as well. Do you agree that the media has somewhat contributed to spreading your music?

That was such an amazing process. Zimmer is one of our idols. Our drummer, Daniel Platzman, actually studied film score in college. He was just without words when we were in the studio. It was a great experience for us and I think that as long as we are able to have some kind of creative connection to everybody out there, it seems like it’s a good connection between the music and what is behind. I think it’ll be a great opportunity to connect to more fans, fans that wouldn’t necessarily hear you through the radio or other more conventional means.

What can Korean fans expect from your upcoming concert in Seoul?

So we are going to make sure that it’s going to be a really incredible, special experience for everybody there. We are going to go as hard as we possibly can and just push ourselves to the limit to create an experience for all of our fans over there in Korea. We really respect everybody there. We want to show that we appreciate the opportunity to come there and play for the amazing people of Korea.