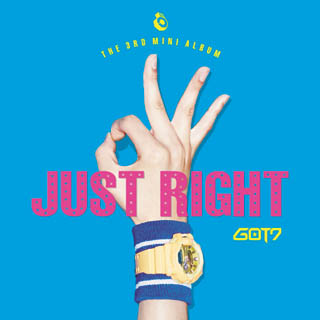 
Just eight months after releasing their debut album “Identify” in November, GOT7 has returned to the spotlight with their new six-track EP “Just Right.”

The compilation kicks off with the title track, written and produced by the Grammy-winning tandem Jackie Boyz, who have previously collaborated with some of best-selling pop artists including Justin Bieber, Jay Sean and Flo Rida.

The lyrics were written by Park Jin-young.

“Just right” has a heavy Southern hip-hop feel mixed with just the right amount of pop. In the song, the boys sing about a man attempting to reassure his girlfriend, who is anxious that he may leave her.

He asks the mirror and the scale to “please tell her that she’s pretty, the way she looks now.”

For young couples engaged in lover’s quarrels, the track is just right.

On a slower tempo, the urban R&B-style song “Whole Body Reacts” is a little more unfamiliar to the ear. And fans who enjoy hip-hop and dance music will enjoy the simple, yet addictive beat in the song “Nice.”