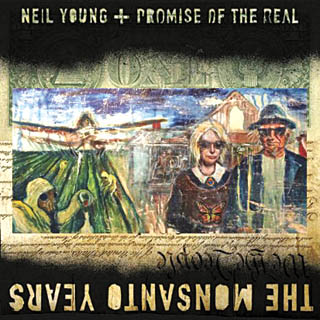 NEIL YOUNG + PROMISE OF THE REAL


Neil Young’s voice, playing and passion are undimmed, but his lyrical talent is diminished in much of this new album, which - as the title “The Monsanto Years’’ suggests - is obsessed with what he perceives as the despoiling of America at the hands of corrupt corporations and complacent politicians.

The sound is distinctive Neil, little changed over 50 years, though his voice is a bit scratchier now. But he’s replaced the symbolic approach with a more literal style. However, the complaints about Monsanto and Walmart devolve too quickly into sloganeering.

It’s a pity that the words aren’t more nuanced, because much of the music is haunting. “Wolf Moon’’ is evocative and powerful to begin with, but weakens as it becomes overtly political.

The recurrent themes are plunder and greed. His position is heartfelt, but there is something discomfiting about Young positioning himself as an all-knowing seer, putting people down for wanting simpler, cheerier songs. It’s easy to admire Young for taking a stand, but these songs would benefit from a subtler approach. AP