All that glitters is Goryeo, and much more

All that glitters is Goryeo, and much more 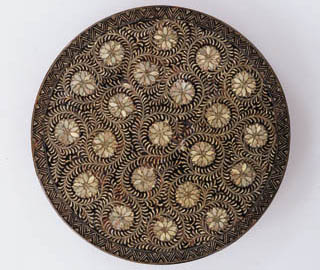 A lacquered case from between the 14th and 15th centuries shows how lacquerware inlaid with mother-of-pearl evolved from the Goryeo Dynasty (918-1392) to the Joseon Dynasty (1392-1910). Provided by the organizer

With chisels, knives, brushes and sometimes bare hands, ancient Korean artists made masterpieces. And the pieces they left behind tell us that traits like modesty and simplicity hardly define ancient Korean aesthetics.

The exhibition currently underway at the Leeum, Samsung Museum of Art is attempting to defy the notion that ancient Korean art is mostly about being subtle, refrained and minimalist.

In fact, the museum, one of Korea’s best in terms of its collection of ancient art, has been trying for the past several years to show that ancient Koreans loved colors, precision, lavishness and details.

“The exhibition covers all eras from the ancient times to the Joseon Dynasty, as well as all genres [of art],” curator Jo Ji-yoon said of the latest in the series, “Exquisite and Precious: The Splendor of Korean Art.” 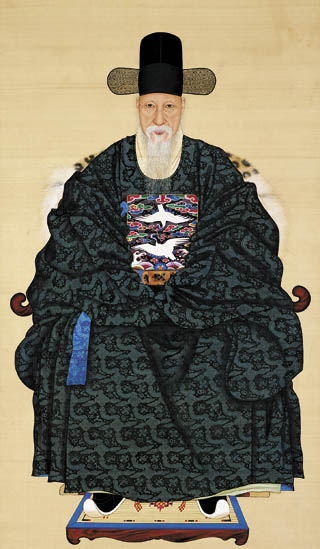 “Portrait of Oh Jae-sun” from between the 18th and 19th centuries exemplifies how court painters of the Joseon Dynasty were dedicated to details and accuracy. Provided by the organizer

“We wanted to show the origins of such magnificent and exquisite artworks as well as how they evolved over the years,” Jo added.

He has been behind the current exhibition as well as the exhibitions in 2012 and 2013.

It’s also notable that for this special exhibition, the Leeum curators made an English-language guide available for all 140 pieces on display.

The ongoing exhibition shows how even the earliest Koreans had an admiration for embellishment as well as suitably precise techniques. A mirror from the Bronze Age, for instance, comes with strikingly delicate geometric patterns created with extremely thin lines.

The people of the Silla Dynasty (56 B.C. to A.D. 935) were known for their love of glitter and splendor, which is demonstrated in the exhibition.

On a hexagonal sarira reliquary from seventh-century Silla, one can see how the artisans left barely any space empty. They engraved multitudes of tiny circles on spaces which otherwise would have been vacant.

Curator Jo said they are fish eggs added to increase the sparkle.

The Great Gilt-bronze Incense Burner of Baekje, National Treasure No. 287, from Korea’s Baekje Kingdom (18 B.C. to A.D. 600) is also on display. It is considered one of Korea’s most ornate and flamboyant ancient works.

But the exquisiteness reached its peak during the Goryeo Dynasty (918-1392), and in fact, the title of the exhibition comes from a Chinese envoy’s description after seeing Goryeo’s mother-of-pearl inlay techniques.

“Goryeo is the era of craftsmanship,” Jo said, “and the three most evident techniques are repousse, where a thin sheet of metal is tapped outward to give an embossed, three-dimensional shape; silver thread inlays; and mother-of-pearl inlays.”

At the exhibition, Goryeo lacquerware inlaid with mother of pearl is undoubtedly one of the highlights.

It takes stunning craftsmanship and precious materials to produce lacquerware inlaid with mother of pearl. As a result, they were often Goryeo rulers’ official gifts to foreign dignitaries. This is also part of the reason that so few of them remain today, and many of the works that exist are kept in museums in Japan, the United States and Europe. Since it’s so rare, every time a Korean museum acquires or displays a new piece, it makes headlines. 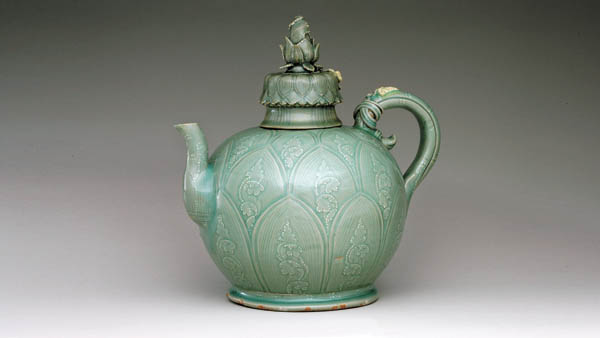 A celadon bottle from the 12th century features a pupa on the handle and a butterfly on the lid, conveying the wit and humor of Goryeo artisans. Provided by the organizer

Today, there are only 17 pieces of Goryeo mother-of-pearl lacquerware known to exist worldwide. Of them, nine are on display at the Leeum exhibition. Since Goryeo was a devout Buddhist state, the pieces designed to store the Buddhist sutra, or religious texts, were particularly of high quality. There are known to be nine such sutra boxes remaining today around the world, and six of them are being shown at the exhibition.

The technique carried on to Joseon, but the patterns became larger and left more empty spaces.

Joseon was no exception

Another must-see at the exhibit is the pair of Thousand-Armed Avalokitesvara. One is from Heungcheon Temple in Korea and the other, from between the 14th and 15th centuries, is from the Musee Guimet in Paris. Only three such pieces are known to exist today, with the third one residing at the National Museum of Korea.

Although Joseon art in particular is associated with the less-is-more aesthetic, Leeum officials say the portraits and landscape paintings show that Joseon artists were just as interested in details and precision.

When painting royalty and aristocrats, court painters did not miss a strand of hair or an age spot.

“In terms of precision and realism, Joseon portraits are among the most revered works in all of East Asian painting,” Jo said.

In the “Portrait of Oh Jae-sun” from the late 18th century and early 19th century, for instance, the richness and the three-dimensional effects of the oversized, deep green clothing and the resulting feeling of dignity and class are evident.

Many landscape paintings of Joseon also show remarkable details and accuracy. They had to because such paintings were often used as maps for city planning and defense strategies. For instance, in the landscape paintings of Jeong Seon (1676-1759), the background is depicted minimally to provide spatial depth, but the main subject is drawn in stunning detail.