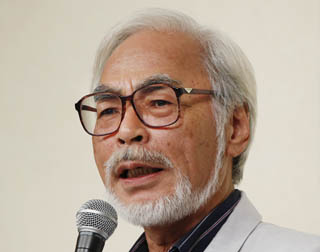 KOGANEI, Japan - Master of animation Hayao Miyazaki is working on his first fully computer-generated film - a short anime about a tiny, hairy caterpillar. In a rare public appearance at his office in Tokyo’s western suburbs, Miyazaki told foreign journalists Monday that the new film will be screened at his Ghibli Museum and is to be completed in about three years.

“I’m trying to make a story about a tiny, hairy caterpillar like this, so tiny that it may be easily squished between your fingers. Little hairy caterpillar clinging to a tiny leaf,’’ he said, making a gap between his thumb and index finger the width of a pencil to indicate its size.

“We just started working on it,’’ Miyazaki said. “This time, our longtime staff will meet the new staff from the world of computer graphics.’’

Ghibli producer Toshio Suzuki said last week that the new film had been planned before the production of the 2003 Oscar-winning film “Spirited Away,’’ a masterful, disturbing critique of modern industrialization. He said the upcoming film, “Kemushi no Boro’’ (Boro The Caterpillar), will be about 10 minutes long. It’s Miyazaki’s first fully computer-generated film, he said.

Miyazaki lamented that the time has changed from the era of hand drawing to computer animation.

“We no longer use watercolor, and soon, production of poster color for backgrounds is going to stop. I can’t find good brushes any more, and the quality of drawing paper has declined,’’ he said. “It seems the world has been changing fundamentally.’’

As a film director, Miyazaki said he wants to focus on the basics of life over millions of years instead of short spans of history.

But as a pacifist, his concern is fixed on Prime Minister Shinzo Abe’s policies on national security and history. Those issues are particularly important this year, the 70th anniversary of the end of World War II, and Abe is set to issue a statement.

“That war of aggression was completely wrong, and we must express deep remorse over the tremendous damage we caused to the people of China. We must clearly state that we regret that,’’ Miyazaki said. “I know there are many people who wish to forget that part of history, but we must never forget the senseless acts that Japan conducted in China over a long period of time.’’

Miyazaki, one of animation’s most admired and successful directors, and co-founder of Studio Ghibli, is also known for films such as “My Neighbor Totoro,’’ “Princess Mononoke’’ and his last full-length film, “The Wind Rises.’’