For the first time in five months, foreign investors were net sellers in the Korean stock market last month. June was also the first month this year in which there was a net outflow of investments in bonds.

According to a report by the Financial Supervisory Service (FSS) on Tuesday, foreign investors sold a net 950 billion won ($831 million) worth of Korean stocks and bonds as the Greek sovereign debt crisis destabilized markets around the globe.

European investors were the biggest stock sellers, dumping 2.9 trillion won’s worth, and the British alone accounted for 2.3 trillion won of the outflow. Investors based in Singapore followed, with 400 billion won in withdrawn investments. The Swiss were next at 348 billion won.

But while the Europeans sold, Americans remained the biggest net buyers of local shares as they have been since March. In June, they purchased 3.1 trillion won in stocks.

Americans also dominate in their holdings of Korean shares. Nearly 40 percent of the listed stocks owned by foreigners were held by U.S. investors at the end of the first half, at 173.9 trillion won. The second-biggest foreign owner was the British, who held 8.4 percent, or 37.3 trillion won. Luxemburg ranked third, at 6.1 percent or 27.3 trillion won.

Also at the end of June, the total amount of Korean shares owned by foreign investors was 445 trillion won, or 29.3 percent of total market capitalization. 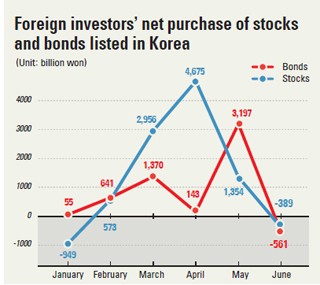 In the bond market, foreign investors purchased 6.4 trillion won worth of listed bonds in June but cashed in about 7.1 trillion won of maturing bonds, resulting in an outflow of 561 billion won.

Investors from the Middle East also joined the outflow, selling a net 115 billion won of bonds.

Switzerland was the biggest buyer in Korea’s bond market last month, purchasing a net 791 billion won worth. Hong Kong was second at 197 billion won, followed by Norway at 146 billion won.

As of the end of June, the accumulative balance of bonds owned by foreign investors was 105.6 trillion won, falling 300 billion won from May, the FSS said.

Bonds owned by U.S. investors accounted for 17.8 percent of all bonds held by foreigners. Chinese investors held the 16.1 percentile and Luxemburg owned the 11.9 percentile. 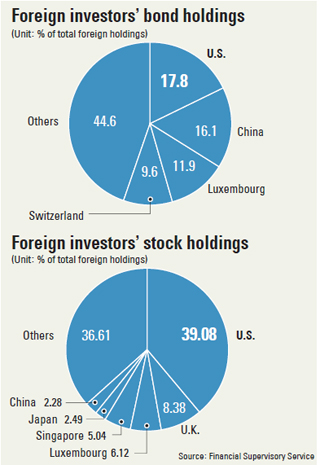