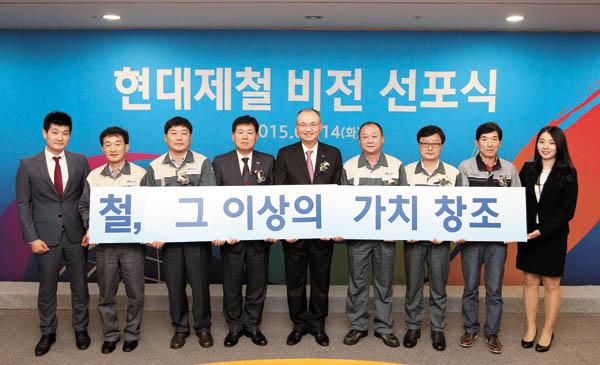 Hyundai Steel’s vice chairman Woo Yoo-cheol, fifth from left, poses for a photo with employees after announcing business plans that aim to make 31 trillion won (27 billion dollars) in annual revenue by 2025 at the company’s headquarters in Yangjae-dong, southern Seoul, Tuesday. Provided by the company

The nation’s second-largest steelmaker said the expansion into new areas will help turn the company into a global manufacturer with an annual revenue of 31 trillion won ($27 billion) by 2025.

The new vision unveiled by Vice Chairman Woo Yoo-cheol at the company’s headquarters in Yangjae-dong, southern Seoul, on Tuesday comes as the steel industry struggles with falling revenue due to weak demand both domestically and globally.

“The new vision reflects the company’s strong will to create new opportunities that others haven’t made yet in the business,” said Woo, the vice chairman. “We will keep innovating to accomplish the new vision.”

To develop the next-generation automotive steel sheets, the company invested 129.5 billion won on its No. 2 steel mill in Dangjin, South Chungcheong. The company will start producing high-strength aluminum-coated steel sheets and galvanized steel sheets next February.

The company is also building a plant that can produce 1 million tons of special treatment steel annually on a 247,500-square-meter (61-acre) lot inside the Dangjin plant. Once that plant is operating, the company is expected to improve its competitiveness in the car engine and transmission parts businesses, which use such steel.

In addition, the company has plans to expand into the non-steel sector because many materials including aluminum, magnesium and carbon fibers are being used to lighten cars, which is a trend in the auto industry to provide higher fuel efficiency.

Such plans also reflect the merger with Hyundai Hysco, which specializes in steel sheets for automobiles. After the merger, the company became a steelmaker with total assets of 31 trillion won and the capacity to make 20 trillion won in revenue per year. The total combined assets of Hyundai Steel is now about 21 trillion won short of the country’s largest steelmaker, Posco.

The combined operating profit for the merged companies was about 1.84 trillion won last year, about 1.4 trillion won short of the leading steelmaker, which has had a commanding lead in the production of steel for cars in both the domestic and global market.

Hyundai has been preparing the merger for two years to expand its share in the business, taking over Hysco’s cold-rolled sheets production business in December 2013 to create an integrated steelworks.

The company said it aims to make 26 trillion won in revenue by 2020 and 31 trillion won by 2025. In preparation, the company formed a committee to provide a specific management vision in March.