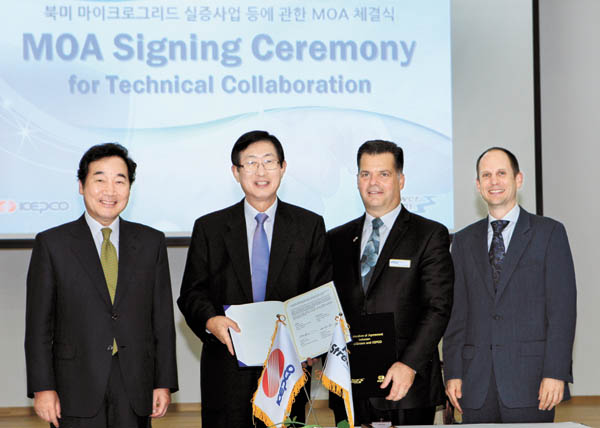 The Korea Electric Power Corporation (Kepco) has sealed an export deal worth 15 million Canadian dollars ($11.7 million) to a Canadian electricity company for its in-house microgrid power generation system. This is the first export of the homegrown technology.

The nation’s power distributor said on Tuesday that it had signed a memorandum of agreement with Canada’s PowerStream on Monday at its headquarters in Naju, South Jeolla, to export the technology for building and running the system.

“Beyond just technology exports, the memorandum of agreement allows Kepco and its partner companies to jointly work with PowerStream to further develop the technology and jointly explore customers in third markets,” Cho said at the signing ceremony.

The microgrid is a small-scale integrated electrical supply system, in which power generation, storage and distribution of renewable energy sources, like solar and wind, power are automatically controlled. The microgrid system is suitable for small towns located in isolated regions or islands, enabling them to independently supply electrical power of up to several megawatts.

The Canada contract includes the joint construction of microgrid systems in the town of Penetanguishene in northern Ontario, where the technology can be tested and further developed with PowerStream.