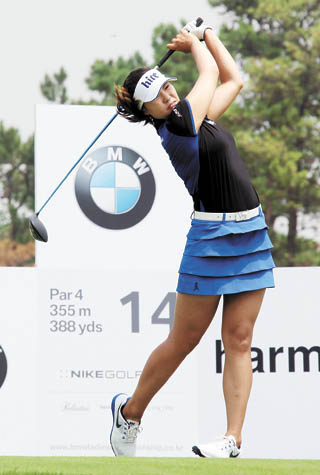 Chun In-gee at the pro-am tournament on Wednesday before the BMW Ladies Championship in Incheon. The event starts Thursday. Provided by BMW Korea

Chun returned to her homeland on Tuesday, after winning last weekend in Pennsylvania as an invited player. Without pause, the 20-year-old is on the golf course again at the Sky72 Golf Club in Yeongjong Island, Incheon.

“I focused on getting good sleep since I had to adjust my condition on my return flight,” Chun told reporters at Incheon International Airport on Tuesday. “I had no time to rest after many interviews, but managing my condition is also something that an athlete needs to work on.“

Chun is the money leader on the KLPGA Tour, with more than 559 million won after winning three events this season. The world’s No. 10 golfer is being chased closely by Lee Jung-min, who tied for 35th at the U.S. LPGA Open. Lee has collected 509 million won, also with three wins.

Ko Jin-young, who also bagged her third KLPGA Tour victory last week by winning the Chojung Sparkling Water-Yongpyong Resort Open, is also a top contender to deny Chun back-to-back wins. The 20-year-old has collected more than 447 million won this season. “Personally, I have lot of interest in cars, and as I’m to play on the course with lot of cars displayed, I’m thrilled,” Ko said.

Along with those top three, an 11-time KLPGA Tour winner, Seo Hee-kyung, is also returning from the LPGA Tour to play this tournament and 39-year-old veteran Kang Soo-yun has also been invited.

For Chun, defending her top ranking on the KLPGA Tour is not the only task to address. Before Friday at 5 p.m. (U.S. time), the Hite Jinro-sponsored golfer needs to decide whether she wants to join the U.S. tour immediately or defer the decision. Her victory last week at the Lancaster Golf Club gives her an automatic U.S. LPGA card; she can either accept it now and play a season and a half on the U.S. tour, or elect to begin next year. Media reports here quoted the LPGA as saying if Chun elects the latter course, she must apply by Nov. 23.

The golfer said she hasn’t yet made a decision.

“I’ve set a lot of goals I want to attain here in Korea, and I will make my choice carefully after taking them into account,” she said Tuesday.

Chun turned pro in late 2012 and joined the KLPGA Tour the following year. She hasn’t discussed those goals in detail, but people familiar with the golf scene here say she may have her eye on the Korean money title and the season’s MVP award this year.

According to her father, Chun Jong-chul, she is also being courted by the Japanese LPGA Tour. In May, she won a JLPGA Tour major championship, the Salonpas Cup.

“I think the JLPGA was impressed by Chun’s donation of rice and the automobile she won at the Salonpas Cup for earthquake relief efforts,” he said.

Chun is expected to stay in Korea for two weeks before playing in this year’s fourth international major, the Women’s British Open, on July 30.