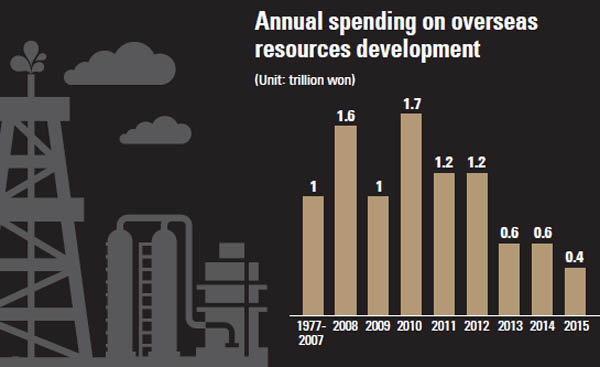 Korea’s audit agency reported that the nation’s overseas resources development projects have failed over the past three decades, saying that economic ministries and state-run energy companies have to reconsider their entire long-term development plans.

The Board of Audit and Inspection (BAI) on Tuesday announced the interim results of its evaluation, saying the government has spent nearly 36 trillion won ($31.5 billion) over the past 30 years but has lost 12.8 trillion won in the process.

The audit board also warned that public corporations’ debts may rise if present plans continue; to finish current projects would require an additional 46.6 trillion won over the next few years for extraction projects the auditors said were low in value.

The inspection has been under way since March and involves three companies: the Korea National Oil Corporation, Korea Gas Corporation and Korea Resources Corporation. It also looked at the Ministry of Strategy and Finance and the Ministry of Trade, Industry and Energy, which oversee those public companies. 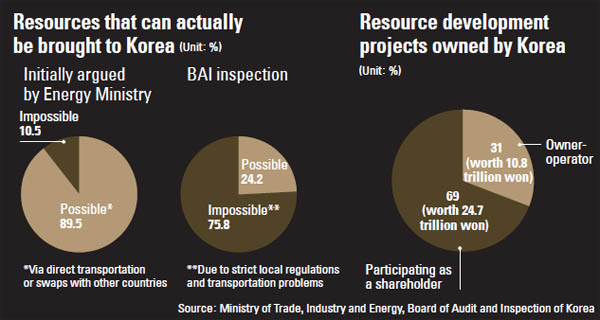 “Despite the initial purpose of these projects, which was to obtain a stable supply of energy resources, those selected by the three companies have turned out to be simply investment projects mostly involved in buying shares and expanding the companies’ financial assets,” Jeong Gil-young, a senior auditor at the BAI, said at a press briefing on Tuesday.

National Assembly members complained that the government and state-run companies were pushed hard by the Lee Myung-bak Blue House’s campaign to end Korea’s near-complete dependence on foreign energy sources. Under the Blue House’s pressure, they said, the Finance Ministry and Energy Ministry started buying oil, gas and mineral deposits overseas by using funds from a “special budget for energy” in the government budget and having the companies take on massive amounts of debt.

After the criticism, both the auditors and national prosecutors began investigations into the matter.

The BAI faulted the overseas development projects for investing in countries that don’t allow the export of resources even after knowing those rules. The profits from those investments looked good on paper but did nothing to help Korea’s energy dependence.

Since 1984, the Korean government has told the three public energy companies to develop energy resources such as oil, natural gas and minerals. The 169 projects have consumed 35.8 trillion won over the past three decades.

Early in the process, the government aimed to export energy sources from Korean-owned sites abroad to meet demand in Korea.

But because many countries, like the United States in the case of North Slope Alaskan oil, had bans in place on exports, the Energy Ministry and the three companies decided to sell production in those countries to use the cash on energy imports, as many other countries do. The Korean resources development law was also changed to allow passive investments in other nations’ resource extraction businesses.

The BAI report said that went against the nation’s stated purpose of investing in other countries’ energy resources for Korea’s benefit, adding that the three companies only focused on window-dressing their results and expanding their assets abroad.

The oil corporation, for example, was only able to send 2.24 million barrels of oil to Korea, less than half a percent of the oil amounts (500 billion barrels) it owned through its investments.

The audit report said the three companies together invested nearly 7.8 trillion won in 23 projects whose production could not be exported. The resources corporation, for example, invested about 304 billion won in mineral fields in China and Australia, two countries that had such bans.

“They were intent only on expanding the size of corporate holdings, and did not evaluate each of the projects’ business value,” one BAI audit official told the JoongAng Ilbo, an affiliate of the Korea JoongAng Daily, on Tuesday, requesting anonymity. “The companies should be bold, sell off unprofitable projects and push further their corporate restructuring.”

If the current investment plan continues, the BAI forecast, the oil corporation will have a debt-equity ratio of 320 percent by 2019; that of Kogas will be 277 percent and that of the resources company a whopping 692 percent.

The Energy Ministry did not react officially to BAI’s interim evaluation report, but it indicated that it accepted the auditors’ evaluation.