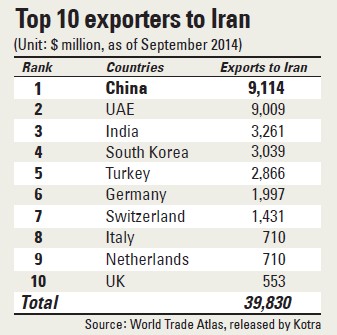 Expectations are rising that the lifting of sanctions on Iran will be a boon for Korean companies in several industries, particularly the construction of offshore oil rigs, shipbuilding and petrochemical exports.

“If sanctions are lifted on Iran, it would boost domestic consumption, as well as trade with other countries,” Kim Seung-wook, head of the state-run Korea-Trade Investment Promotion Agency’s (Kotra) office in Tehran, said on Wednesday by phone. “Particularly, if Iran’s oil production is increased, it would trigger demand for large-scale offshore oil rigs or shipbuilding, in which Korea has world-class skills.”

Although the sanctions will remain until a review by the U.S. Congress and an inspection in December of military facilities in Iran by the International Atomic Energy Agency, the Korean government has already prepared a plan to support Korean companies’ doing business with Iran, the Ministry of Strategy and Finance said.

“The government launched a plan to provide effective support for Korean companies to help them expand market share in Iran at a Cabinet meeting on July 8,” the Finance Ministry said in a press release on Wednesday. “Participation by Korean companies is expected to expand into the construction and shipbuilding industries, as well as exports of petrochemical products and auto parts.” 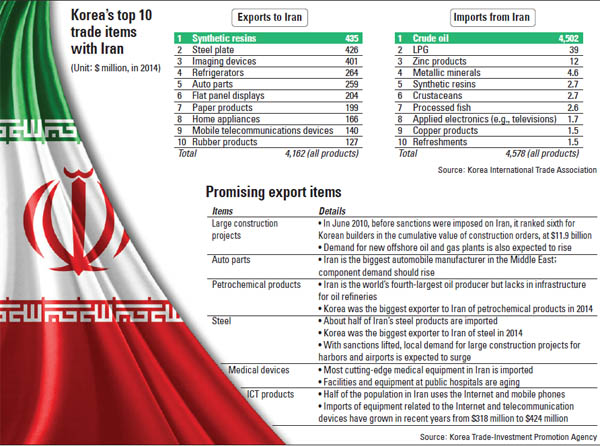 Since Washington imposed sanctions in 2010, Korean builders have not won any orders from Iran for large-scale construction projects.

Iran, which has the world’s fourth-largest oil reserves, was a major buyer of Korean offshore oil or gas rigs.

Under the sanctions, such business was prohibited.

“Statistics show that for Korea, Iran was the sixth-biggest partner in terms of the accumulative value of construction orders as of 2010,” a Finance Ministry official said. “That means Korea was fully competitive in the construction of offshore platforms.”

Exports of petrochemical products, which have not been sanctioned, are expected to rise, said Kim Young-hee, an official from Kotra in Seoul.

“Although Iran has plenty of natural resources, including crude oil, development of those resources [by foreigners] has been sanctioned,” said Kim. “Particularly, Iran is lacking in skills to build oil refineries that produce downstream petrochemical products, which Korea excels in.”

According to statistics from the Korea International Trade Association (KITA), an association of Korean traders, refrigerators were the fourth-biggest export to Iran in 2014.

In 2014, according to Kotra statistics, Korean home appliances had a 68 percent market share in Iran, attracting many middle-class consumers. There were no sanctions on some consumer products, though trade was affected by Iran’s being cut off from international finance and banking.

“Korean-made home appliances, particularly refrigerators, are also popular in Iran,” said Hong Jeong-hwa, a researcher at KITA “Cosmetics and other consumer goods could also be attractive to Iranian people.”

“Even under the sanctions, the Iranian government tried to develop its own domestic industries, such as automobiles,” said Hong. “So exports of Korean auto parts, such as steel plates, continued to rise.”

Despite the rosy outlook, analysts said competition between Korea and other countries in the Iranian market will be fierce.

“The opening up of the Iranian market is not just for us but also for European and U.S. exporters, who couldn’t trade with Iran due to the sanctions,” said Kim, the head of Kotra’s Tehran office. “The competition would be apparently tough.”

“In the field of construction of oil or gas rigs, many European developers previously built them in Iran and they have good reputations,” Kim said. “Although Korean builders participated in many construction projects, they lagged a bit behind European builders.”

As Korean companies were frozen out of the Iranian market due to sanctions, some Chinese companies took up the slack, particularly in automobiles and consumer goods.

“China is one of the countries benefitting from the sanctions,” said Hong from KITA “In the automobile industry, Foton Motor has expanded its market share while Iran has been under sanctions.”

“As the Iranian economy suffered under sanctions, consumers had no choice but to turn to cheaper products,” said Kim in Tehran. “So many prefer Chinese, Turkish or Russian products.”

Specialists in Iran also advised Korean businessmen to be cautious in signing contracts with Iran.

“While Iran had little trade with the outside world, the rules regarding trade and the judicial system became opaque,” said Kim in Tehran.

Shin Tong-chan, a partner at Yulchon LLC, a Seoul-based law firm that specializes in lawsuits in the Middle East, said corruption is rampant in Iran’s courts.

“Many lawyers in Iran say rulings by Iranian judges are not that fair or transparent due to rampant corruption,” said Shin. “So to prevent any legal disputes, Korean businesses must have completely clear contracts, and they may have to resolve conflicts through international arbitration.”

“The most important thing is that sanctions have not been lifted yet,” Shin said. “Many expect them to be lifted early next year. Before then, all sanctions will be maintained as they are now.”