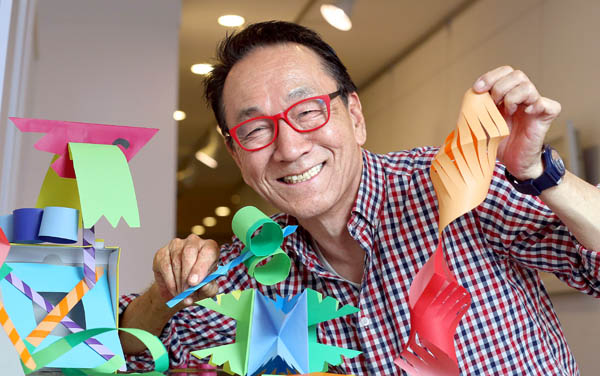 Kim Young-man, or Mr. Jongi Jeopgi, cried. So did viewers, most of whom grew up learning the art of paper-folding from him.

But after decades, his iconic friendly voice and magical techniques are the same. Messages like “I love you” and “I’m getting all teary” flooded the chat room, where viewers can give instant feedback on the episode.

The messages also made Kim shed tears, as he thanked his fans for remembering him. 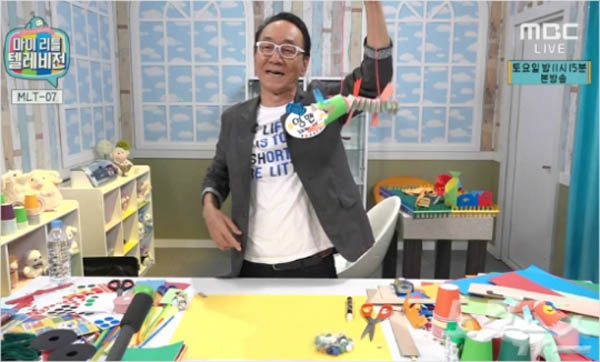 Kim Young-man, who taught the art of paper-folding on TV in the 1980s and 1990s, reemerged into stardom recently after appearing on MBC’s “My Little Television.” [Screen Capture]

Most Koreans in their 20s and 30s remember the days when they woke up in the morning, prepared a piece of paper and waited for Kim to appear on TV and teach them the magic of transforming a mere sheet of paper into almost anything.

The 65-year-old was pretty much the hottest celebrity among children at the time. And after his recent TV appearance, his name instantly became the No. 1 searched word on major web portals in Korea.

Now he is a director at the Paper Culture Foundation, which instructs teachers in developing countries on the art of paper-folding. Ilgan Sports, an affiliate of the Korea JoongAng Daily, talked to Mr. Paper-Folding on July 13, a day after he reemerged into nationwide stardom.

Q. What made you cry on the show?

A. I suddenly got emotional when those who folded paper with me as little kids told me in the chat room that they love me. But now I feel kind of embarrassed about getting all teary.

What thoughts did you have seeing the messages?

I was so grateful that they grew up well. These days, there are many malicious comments targeting television personalities. But I saw no such comments [for my show]. They may be adults now, but they seemed to be as pure as when they were young.

What have you been doing all these years since you stopped appearing on TV?

I was in fact busier than when I was on TV. I opened an arts academy, taught at universities and attended various seminars - all related to paper-folding. So in a way, I never stopped folding paper. But I didn’t do press interviews because I wanted to hide from the spotlight.

Why did you want to hide?

Simply put, I wanted my little friends to remember me, our time together, as it was in the old days.

Is it correct to say that your life is about paper-folding?

I guess so. In my house, there are papers and scissors on bedside tables as well as sofa tables. I keep them there because you just never know when new ideas will come up. People ask jokingly why I study paper-folding so intensely even at my age. But I always feel I should level up.

In the past, actress Shin Sae-kyeong was also on your show as a young girl. What was she like?

She’s such a superstar now, so it’s an honor for me. I recall her as a very pretty and polite girl. She was a second grader in elementary school when she appeared on my show. If an opportunity comes, I’d like to do paper-folding with her once again. I think it would be fun.

Any other words for your fans out there?

Many of my fans have now graduated from university. Some are married. They were so young and pure. And I feel so grateful to have chatted with them once again through “My Little Television.” That’s all I can say - thank you. Thank you again for taking me down memory lane. It’s been a great adventure.