Despite 2-year drought, Tiger has hopes at St. Andrews

Despite 2-year drought, Tiger has hopes at St. Andrews 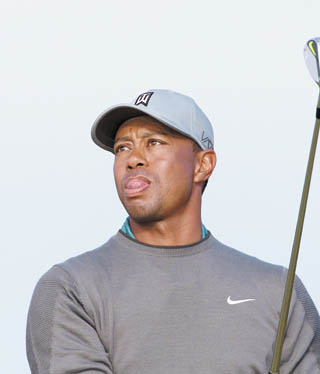 ST. ANDREWS, Scotland - Winless in nearly two years, Tiger Woods at least has experience on his side at St. Andrews.

It has been 20 years since he first played the Old Course as a 19-year-old amateur and heard the secret was to hit it hard and hit it left. After playing the British Open four times at St. Andrews and winning twice, he realized that wasn’t the case. There are bunkers to avoid and angles to create, and the course can change with the slightest shift in direction of the notorious wind.

Whether that’s enough to carry him this week depends more on his golf, which he says is not as hopeless as it might appear.

“I’m still young. I’m not 40 yet,’’ said Woods, who has five months left in his 30s. “I know some of you guys think I’m buried and done, but I’m still right here in front of you. Yeah, I love playing. I love competing, and I love playing these events.’’

He just doesn’t win them - his last major was the 2008 U.S. Open - and it’s rare he even contends since he chose last year to change his swing at about the same time he was trying to recover from another round of injuries.

Hope comes from more than just his affection for St. Andrews. Woods said the way he struck the ball in his last tournament round, a 67 at The Greenbrier Classic to tie for 32nd, was as good as he has been in two years.

“That was awfully nice to be able to do coming into this week,’’ he said. “I’ve hit the ball just as well in my practice rounds.’’

If that’s the case, that would make this an important week because it would be the first time since his last victory (August 2013 at Firestone) that he goes into a major with good health and a reasonable idea what to expect.

- He was out three months because of back surgery, missed the cut in his return at Congressional and then had his worst 72-hole finish in a major at the British Open.

- He withdrew in the final round at Firestone after jarring his lower back, showed up late for the PGA Championship and missed the cut.

- He took two months off to fix a short game in disarray and returned at the Masters, where he tied for 17th. Woods said he “had a chance to win’’ at Augusta National, but he was 10 shots behind going into the final round and ended up 13 shots behind Jordan Spieth.

He called The Greenbrier, where he finished six shots out of the lead, a “very, very good sign.’’

Experience should not be dismissed at the home of golf. Tony Lema in 1964 was the last player to win a British Open at St. Andrews without ever having competed on the Old Course. Louis Oosthuizen (2010 winner) and John Daly (1995) previously played the Dunhill Cup.

That’s one obstacle facing Spieth, who is trying to become the first player to capture the Masters, U.S. Open and British Open in the same year. He did play a practice round on his way to the Walker Cup in 2011. And he played 18 holes upon his arrival Monday from his playoff win at the John Deere Classic.

Still, the betting favorite is the 21-year-old Old Course rookie.

While Woods knows and loves the Old Course, he’s not used to seeing it this way - green from rain, with intervals of rain expected during the week. “You can’t quite chase it like you normally do,’’ he said.