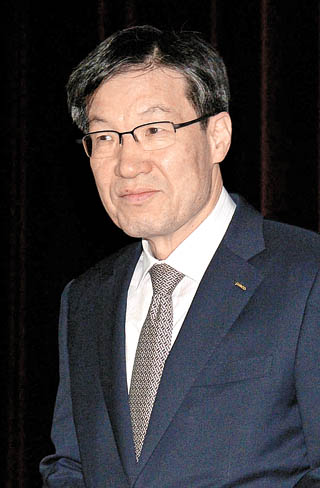 Posco Group chairman Kwon Oh-joon announced a series of aggressive reforms on Tuesday, two months after he declared he would try to root out reckless management at the group’s affiliates.

The 65-year-old chairman said he will strengthen the rewards and punishment system to prevent executives from making the kind of careless investments that have led to big losses over the past few years and prompted an investigation by prosecutors.

“We apologize for having made our investors worry about us with some bad news that has come out lately,” Kwon said prior to announcing the reform plans at the headquarters of the Korea Exchange in Yeouido, western Seoul. “In order to overcome the group’s current crisis as soon as possible and not make similar mistakes in the future, we felt that it was necessary to provide strong reform plans.”

The nation’s leading steelmaker is going through a hard time both financially and politically. Due to the oversupply of Chinese products and decreasing steel demand in the global market, as well as questionable investments, the company’s overall revenues have plunged. The group’s construction arm, Posco E&C, is also under investigation for allegedly running a 10.7 billion won ($9.4 million) slush fund in Vietnam, considered part of the legacy of former chairman Chung Joon-yang.

Kwon formed an emergency management reform committee in May, had two meetings per week over the past 72 days and invited opinions from 200 experts to restructure the organization.

Of the five major reforms Kwon announced, the highlight was the managerial reward and punishment system, which Kwon said will be stronger than ever.

“What we are trying to do is reduce the potential risk that could occur in making investments and give stronger responsibilities to decision makers to improve our business efficiency,” Kwon said. “Recently, a total of 43 executives either left the company, or were dispatched to other positions, after they were held accountable for reckless investments and management decisions they made in the past.”

The chairman also said he will upgrade the company’s overall business portfolio to improve its competitiveness in the steel industry. One of the key steps was shutting down uncompetitive affiliates and developing more high-end technology. According to the second quarter performance that was also announced on Wednesday, the company had 15.18 trillion won in revenue, down 9.1 percent from a year earlier, and 686 billion won in operating profit, down 18.2 percent from a year ago.

As part of improving the overall business portfolio, the company will focus more on steel, materials, energy and trading and will try to reorganize the group to reduce the number of insolvent affiliates in Korea by 50 percent. It will also reduce overseas businesses by 30 percent by 2017. In May, Posco decided not to give any further financial support to its affiliate Posco Plantec, which had 189.1 billion won in operating losses last year.

Kwon also declared that he will upgrade the company’s ethics to restore Korea’s reputation.

“We will apply a ‘one strike out’ rule to every employee,” Kwon said. “No matter who it is, people violating the company’s ethical code by taking bribes and embezzling the company’s funds will be out of the organization.” The company also said it will improve its personnel system, and every transaction made with other companies will be based on competitive bidding.