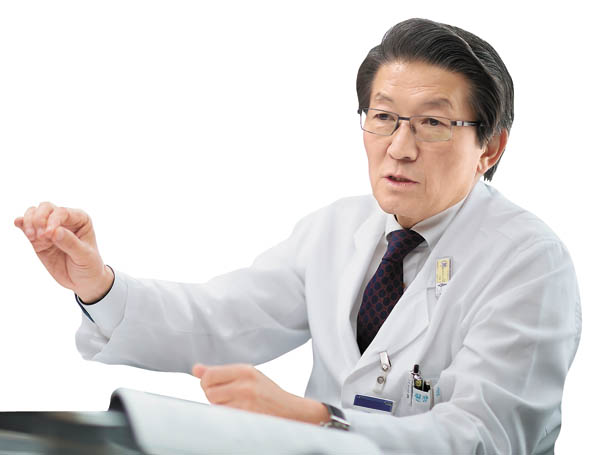 Since Tuesday, there have been no more new reports of the Middle East respiratory syndrome (MERS) for nine consecutive days, which has led many to conjecture that the outbreak is approaching its end. But it’s not over yet.

“The war hasn’t come to an end completely; I think it should be regarded more as if it has calmed down or is at an armistice,” Lim said. “To win a war, support for troops in combat is needed at the right time.”

“The same support must also go to hospitals that couldn’t prepare themselves in time in the fight against MERS,” he added.

Lim obtained his bachelor’s degree in biology at Yonsei University, then attended medical school at Kyung Hee University, specializing in neurosurgery. He sat down for an interview over the weekend with the JoongAng Sunday, an affiliate of the Korea JoongAng Daily, to discuss the MERS outbreak and subsequent efforts to contain it.

Q. It seems like the MERS outbreak is almost over.

A. The MERS outbreak was like a war. The disease’s spread across society was so powerful that it was as potent as if enemy troops had invaded our side. MERS, I think, was able to [dissipate], thanks to our will and medical capabilities.

What is the role of privately run hospitals when infectious diseases like MERS infect the country?

Private hospitals play a role similar to sports utility vehicles that are mobilized during a war situation. If a community center officially assigns a transport role to an SUV [owned by one of the residents], the vehicle has to be placed under requisition when a mobilization order comes during wartime.

Like this SUV, private hospitals must be able to immediately respond to a prepared manual if an infectious disease infiltrates society.

Do you think private hospitals carried out their jobs well during the MERS crisis?

I wouldn’t say that everything was perfect. However, I think at this point, it doesn’t help to pin down someone for responsibility and cast all the blame on them.

Of course, legal responsibilities should be carried out by someone, but I think now is the time when the government, ordinary citizens and the medical community have to trust one another in order to expedite the official end of the outbreak.

We should learn from the MERS crisis this time, and consider it as a lesson so that our society can develop.

We’ve reacted pretty well to MERS, compared to previous infectious disease outbreaks [like the severe acute respiratory syndrome or H1N1 influenza outbreak], thanks to alerts in nearby countries.

Was it like a high-level commander’s order not matching well with what’s going on in the actual battlefield?

Every day is like war to medical staff who actually meet patients and carry out medical treatment - even while their own health is threatened. However, inside the situation room, all these urgent situations are reflected in numbers.

A gap in the understanding of the situation between medical professionals and the government definitely existed during the first and second week of the outbreak.

But I think things turned out well later on. The Minister of Health and Welfare Moon Hyung-pyo and Seoul Mayor Park Won-soon visited local hospitals and supported us.

So our hospital faced a total emergency situation, and we worried that all our 100 blood dialysis patients could be infected by MERS because they have weak immune systems.

Those concerns led us to completely close down our hospital and move all our dialysis patients over to single-patient rooms while managing them in cohort quarantine.

The hospital director was also quarantined, so he worked in the cohort ward for two weeks. Thankfully, no additional patients appeared.

We were so lucky, but in fact, I think it was possible thanks to the commitment and dedication from the medical staff in the ward.

Many doctors and nursing officers on military and medical staffs from other university hospitals helped us at Gangdong.

They must have been worried that they might also become infected with MERS. I would really like to show my appreciation for them.

[The quarantine on Kyung Hee University Hospital at Gangdong was lifted on Saturday and the hospital reopened on Monday.]

Many hospitals reportedly experienced financial losses after the MERS outbreak. What is the reality like?

Many small clinics and hospitals are now at risk for bankruptcy. I heard one clinic that treated a MERS patient today [July 9] reported a business shutdown.

Our hospital expected to see financial damages worth several billion won if the outbreak didn’t end by August.

Hallym University Medical Center in Dongtan saw a MERS outbreak just three weeks after its opening, and now their patients have almost halved since the crisis. Our Gangdong hospital may face severe damage.

The government promised financial support of 100 billion won ($87.5 million) through a supplementary budget, as well as 16 billion won in support from the Health and Welfare Ministry’s reserve.

When Deputy Prime Minister and Finance Minister Choi Kyung-hwan met with the medical circle on June 24, I called for large-scale financial support from the government.

At the time, Choi said, the government may expand financial support up to 160 billion won, if 16 billion won is too little.

Many government officials said such government support needed time before it was actually handed out, due to legal procedures. So it was unable to determine if that would take six months or even a year.

But in the meantime, medical staff may lose motivation and hospitals may go bankrupt. The government system should be more flexible to enable speedier financial support. In this case, legal problems may directly threaten public health.

Does that mean the government should take full responsibility for each hospital’s financial losses?

This request is not aimed at preserving our own property or business. I didn’t ask the government to pay for all the financial damage.

Hospitals themselves have to bear part of the damage. However, I’m asking the government to consider compensation for medical staff - they are the ones who have been taking care of patients despite the risk to themselves.

If we can’t raise monthly salaries for them even for July and August, I think we should be able to pay the promised salary. Because a hospital as an employer can’t pay their employees, I don’t think it’s right for financial support to be delayed by red tape.

There’s a need for government support and measures to prevent a second MERS crisis in the future. What do you think should be done?

During the MERS crisis this time, the role of public hospitals, like the National Medical Center, was really important and reminds us of how significant the role of a public medical system really is.

However, we learned significant lessons, too. When an infectious disease affects Korea, then would we be able to stop this only via public hospitals?

In emergency situations, private hospitals like us have to keep this in mind. In Korea, of the 43 high-class hospitals, 32 are privately run. That means all of them should be able to play the roles of public hospitals. To prepare them, the government needs to provide corresponding support.