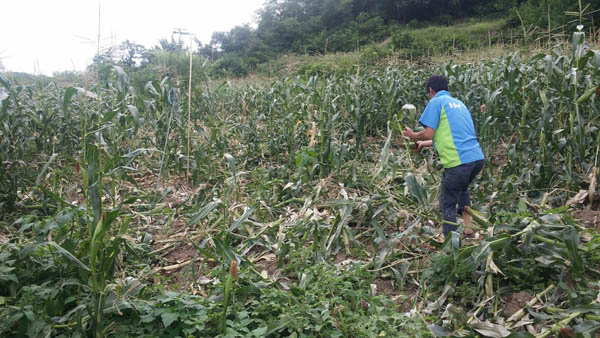 A farmer looks over a cornfield destroyed by wild boars in Chuncheon, Gangwon. By Park Jin-ho

Amid diminished crop yields this year, a number of provincial farmers have found themselves plagued by attacks involving wild boars and elk, local authorities said.

A prolonged drought and a subsequent reduction in agricultural output have prompted wild animals to make their way down to villages in search of food, destroying crops and whole fields in the process.

On Monday, hundreds of cornstalks laid smashed on the ground on a property in Seosang County, Gangwon, with all the kernels inside the husks gone. The total area destroyed in the county amounted to about 1,000 square meters (10,764 square feet).

“This year’s corn harvest is completely ruined because of the wild boars,” lamented Seong Gi-hyeok, 59, who owns a cornfield there. “The animals ate all the corn that was ripe enough to harvest, and consumed them from the inside out.”

Choi In-sik, a 57-year-old farmer in Wonju, Gangwon, also saw his cornfields severely damaged. Since the beginning of the month, wild boars have devoured 1,650 square meters of the corn grown on his land, all of which were nearly ready for harvest.

“Planting took so much effort this year due to the drought. It’s extremely upsetting to think that all that hard work was in vain,” he said, sighing.

In Wonju, officials received 64 calls this month alone from locals requesting that the wild boars and elk be rounded up. And in Chuncheon, 41 damage reports have been submitted.

At Song Byeong-wu’s sweet potato field in Boeun County, North Chungcheong, 15-centimeter (5.9-inch) footprints covered the ground. The plastic covering on the furrows had been torn to tatters and the sweet potato roots were all dug up.

“Damage to special regional products like peaches and apples has occurred over and over,” said Hong Hyeon-dae, who heads North Chungcheong’s Bureau of Agricultural Policy. “Destruction to the crops in the province reaches up to 16,800 square meters in terms of area.”

But contributing to the problem are new regulations on poaching, implemented after a series of gun-related accidents, which have made it more difficult to catch destructive wild animals.

According to the Ministry of Environment, additions to the Wildlife Protection and Management Act declare that harvest time damage prevention groups should be composed of no more than 30 people.

After the revision, these groups, which are assigned to each local government and had previously included between 40 and 60 people, were considerably downsized.

In addition, the National Police Agency only allowed firearm use between 7 a.m. and midnight, which excludes the early morning times when those animals are the most active.

That restriction appears to have spurred the devastation of crops, and many farmers have had no choice but to come to the fields themselves before dawn to chase after the boars and elk with hounds.

Last week, following civil complaints, the National Police Agency shifted the time zone for gun use from 5 p.m. to 9 a.m., and lengthened the firearm use permit to two months, which before was only good for two weeks.

“We changed the guidelines in a way that corresponded realistically to the complaints of civilians requesting gun use permits in time zones early in the morning, when wild animals appear more frequently,” confirmed Lee Yong-wan, in charge of the Public Safety Department at the Gangwon Provincial Police Agency.