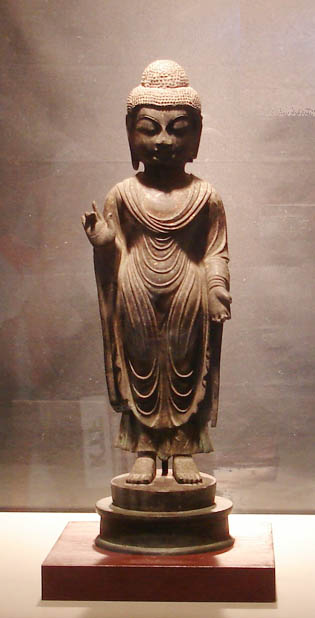 An eighth-century statue of a standing Buddha. [JoongAng Ilbo]

Korea has decided to return one of two ancient Buddhist statues of Korean origin that Korean thieves looted from Japanese temples nearly four years ago, putting partial closure on the prolonged dispute.

In October 2012, a ring of Korean bandits stole and smuggled two sculptures from temples in Tsushima, Nagasaki Prefecture - one a bronze statue of a standing Buddha, that was created in the eighth century during Korea’s Silla Dynasty (57 B.C. to A.D. 935) and the other a seated Bodhisattva created in the 14th century during the Goryeo Dynasty (918-1392).

In 2013, the perpetrators were sentenced to one- to four-year prison terms, but despite Japan’s repeated calls to return the artifacts, Korea opted to keep the statues in government custody.

Officials believe it was possible that the statues may have been stolen by the Japanese, either during its numerous invasion attempts or during the colonial era (1910-45), particularly in the case of the seated Bodhisattva.

“There is no evidence that the statue was illegally taken [from Korea to Japan], and there is no entity claiming ownership over the statue,” the Supreme Prosecutors’ Office explained on Wednesday, referring to the standing Buddha.

Therefore, Korea would be returning the sculpture to its holder at the time it was stolen.

The Supreme Prosecutors’ Office, however, has yet to make a decision on the seated Bodhisattva.

In February 2013, Korea’s Buseok Temple in Seosan, South Chungcheong, filed an injunction requesting that the return of the artifact be banned until it was determined how the statue ended up in Japan.

Academics have found that the seated Bodhisattva has a record stating that it was created by the Korean temple in the 1330s, and managed by the temple until the 1370s.

The record - kept inside the statue - was uncovered when a Japanese monk came across it while cleaning the artifact in May 1951.

The incident was also documented in a Japanese publication on Buddhist art in March 1974.

Korea’s Buddhist community has been attempting to ascertain how Japan’s Kannonji Temple in Tsushima came into possession of it.

Vested parties have argued that there is a high likelihood that it was looted by the Japanese during the late Goryeo period, since the record specifically states that the statue was to be permanently kept at the Buseok Temple.

Furthermore, there is no record that it was donated or transferred, and there are also no existing links between Korea’s Buseok Temple and Japan’s Kannonji Temple during that period.

The standing Buddha, an important cultural property designated by the Japanese government, could be returned to the Kaijinjinja Shrine in Tsushima as early as Thursday.