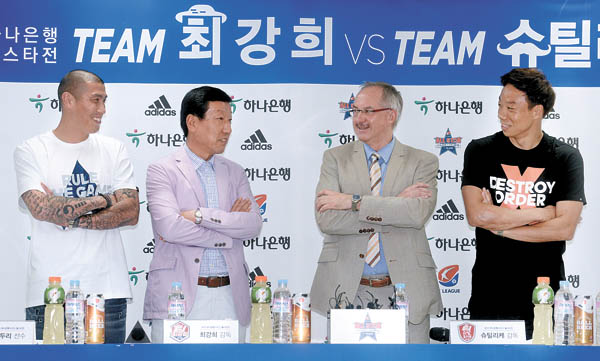 From left, Cha Du-ri, Choi Kang-hee, Ulrich Stielike and Yeom Ki-hun at a press conference for the K-League All-Star match at Ansan Wa Stadium on Thursday. The match will begin at 7 p.m. today. [NEWSIS]

The K-League All-Star Game has usually been a light-hearted affair. But this year’s iteration promises to be more intense; the coaches are urging their players to step up their games.

The 2015 K-League All-Star Game kicks off at Ansan Wa~ Stadium in Ansan, Gyeonggi, at 7 p.m. tonight. The league selected Ansan as a tribute to the city’s suffering after last year’s Sewol ferry disaster; most of a high school class in the city were victims of the sinking.

The match is a clash between a team led by Jeonbuk Hyundai Motors coach Choi Kang-hee and one led by the Korean national football team coach Ulrich Stielike.

Each coach has 11 players who were chosen through fan and player voting, plus an additional seven each chosen by the coaches this week. Team Choi has named FC Seoul defender Cha Du-ri, who will retire after this season, as its captain, while Team Stielike gave the armband to Suwon Samsung Bluewings midfielder Yeom Ki-hun.

Choi, who coached the national team from 2011 to 2013, said the All-Star Game is becoming more intense after Stielike, who took the national team’s helm last September, said his players had to play “total soccer” to beat Choi’s team.

“Stielike is really more serious than I thought,” said Choi at a press conference on Thursday. He laughed and asked, “Is this an All-Star Game or an international football match?”

Interestingly, Stielike has selected many defenders from Jeonbuk, currently the leader of the K-League Classic. Goalkeeper Kwon Soon-tae and defenders Kim Hyung-il and Choi Chul-soon will have to play against their club’s coach, Choi.

Kwon’s selection stood out in particular because the 30-year-old has never been selected to the national team under Stielike.

“They should carefully consider with whom they are going to spend their career longer, me or Stielike,” Choi, 56, said with a grin. “But if they are eyeing spots on the national team and want to impress Stielike, I won’t stop that.”

Stielike had already hinted that players who impress him in the All-Star Game may get a nod to join the final squad for the East Asian Football Federation’s East Asian Cup, which starts next month in Wuhan, China.

The K-League said that there will be performances by K-pop bands during halftime and as part of the opening and closing ceremonies. Fans can hunt for autographs of All-Star players by obtaining an autograph session ticket at the stadium beginning at 3 p.m.