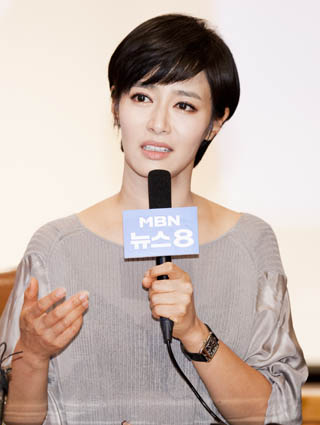 News anchor and reporter Kim Ju-ha, who formerly worked for the terrestrial channel MBC, will begin delivering the news on an evening show on cable channel MBN starting Monday.

She is familiar to audiences in Korea since she was an anchorwoman on “News Desk,” MBC’s prime-time news show, for four years before deciding to become a reporter. She later returned to the show as the weekend anchor, before later moving on to other programs.

However, she stepped down from her position in 2013 when she was going through a divorce, which was widely reported on. She then quit her job at MBC in March.

To announce her imminent return to the news desk, Kim held a press conference on Thursday, ahead of her first show on Monday, and shared her excitement.

Q. What does it feel like to be back in the public eye after what you have gone through?

A. After my story was reported, some people I’m close to texted me and said they have been divorced for a few years. Why do women have to keep to themselves that they have become single again? I hate that it’s the reality.

So I wanted to be encouragement for them. I’m no new-generation woman or anything, but I just want to show that I can live well even after I showed I was hurt. It was difficult to achieve that at my previous job, but I have gotten another golden opportunity. I’m so thankful that I’ve gotten another chance.

Why did you choose MBN?

Many approached me and asked to meet with me, but I chose MBN because I really appreciated their patience. They understood that I needed a break for a few months to spend more time with my children. It felt like people here trust me and accepted me.

What is the thing that concerns you the most about your starting with the news program?

I’ve been thinking a lot about how I will sign off. I could just do something dry like, “Thank you for watching,” or I could make a sharp comment on political issues. Then I started to think that I want to deliver what the audience wants to hear, instead of what I want to say.

How can you know what they want to hear?

From the start of the news program, the audience could ask news anchors questions they want answers to, while we are live on air. Of course, it would be a short time to provide answers, and I would want to respond to them as much as possible, as long as the questions aren’t personal. It would be too little to be called mutual communication, but it could be the start.

If you were able to choose what news content would be reported in the news, what would you do?

Many already live in the flood of news every day. While many of the current news programs simply deliver the list of events, I want to do more than that. I want to take more time to deliver both sides of stories, as hearing from only one voice isn’t fair.

So I would deliver the facts as they are, and the audience would be left to make their own judgments, not me nor the broadcasting center. It is because, in many cases, people hear one thing from one side and start to think, speak and behave as if they have always agreed with the idea from the beginning.