Search on for culprit in DSME shock

Search on for culprit in DSME shock 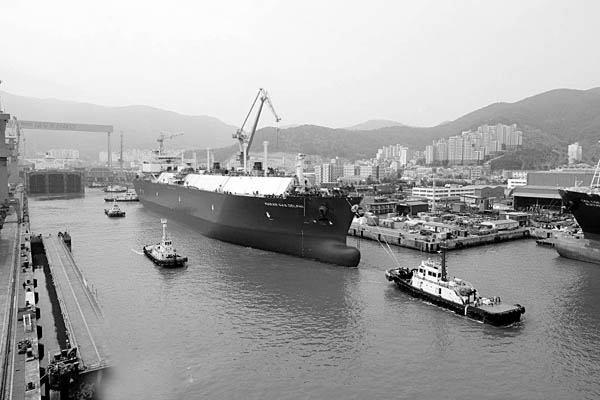 Mounting worries about the ripple effects of Daewoo Shipbuilding & Marine Engineering’s financial troubles has sparked criticism and questions over why the Korea’s No.3 shipbuilder had not alerted markets earlier to its massive losses.

The brokerage said Export-Import Bank of Korea’s exposure might be 12.5 trillion won, the largest among banks, and that of Korea Development Banks, which owns 31.5 percent of DSME, is perhaps 4.1 trillion won.

Adding to growing anxieties, Korea Investors Service, a local unit of Moody’s, has lowered its rating on DSME from A to A-minus, and put the company on its watch list for a “negative review,” leaving room for a further downgrade.

DSME is expected to restructure itself, a process that will probably include asset sales and layoffs.

But analysts say dramatic measures like a court-ordered debt workout program were not likely because such a step would reverberate through the entire economy, which is already struggling with a slump because of the recent Middle East respiratory syndrome outbreak.

“Once the company enters a court-led debt workout program, big losses will likely incur at financial companies. That may also make it more difficult for the shipbuilder to win orders, further lessening its chances for survival,” said Kim Ki-myeong, an analyst at Korea Investment & Securities.

Indeed, KDB issued a statement saying: “At this point, we are not considering a debt workout program.”

“[DSME] remains competitive in the marine and LNG sectors, with the highest order volume among global shipbuilders. It has no liquidity problems and is perfectly capable of managing its operations.”

DSME is expected to report about 2 trillion to 3 trillion won in losses in the second quarter, according to financial institutions.

One of the biggest reasons for the red ink is the offshore plant business, in which the company has made more than 50 percent of its profits. At a press conference in June, Jung Sung-leep, CEO of the company, first warned of bad results in that area and said it would drag down the second quarter’s results.

“It was strange that only DSME reported growth last year among major shipbuilders,” said an executive of another shipbuilder on the condition of anonymity. “I’m not surprised that they were hiding the losses it incurred from the offshore plant business.”

One of the biggest losses in that area was a project to build four oil exploration ships, a contract it won in 2011 and was worth 2.4 trillion won. The project was delayed and DSME lost 1 trillion won as a result.

Struggling in the offshore plant business isn’t a new story for Korean shipbuilders. After experiences similar to that of DSME, the industry’s largest company, Hyundai Heavy Industries, lost 3 trillion won last year, and Samsung Heavy Industries reported 1 trillion won in losses in 2013 from that sector; 2014 figures are not available.

A problem in the offshore plant business is that it is hard to calculate gains and losses accurately until the project is finished.

The building costs are in the trillions of won and the work requires at least three years on average. So the balance sheet of a company in the offshore plant business may have to be adjusted several times over the years, depending on when the company reflects a loss.

But until early in this decade, the offshore plant business was considered a golden goose. In 2010, 44 percent of orders that the nation’s three major shipbuilders (Hyundai, Samsung and DSME) received were in that sector. The trio won $31.5 billion worth of contracts among them in 2010.

But the good times didn’t last long. As international oil prices plunged last year, orders dropped quickly, and the three companies’ reliance on other companies’ technology made things worse. In 2011, HHI earned $9.9 billion from offshore plant work, but the figure was zero this year.

Some critics blame KDB for the problem, saying it did not oversee the shipbuilder despite being its major shareholder. Some go so far as to wonder if KDB knowingly covered up the problems at DSME.

Indeed, many former KDB bankers occupy executive positions at DSME, including its current chief financial officer, who would have known the company’s financial situation.

KDB declined to comment on the allegations, saying, “We are currently not in a position to answer those allegations.”