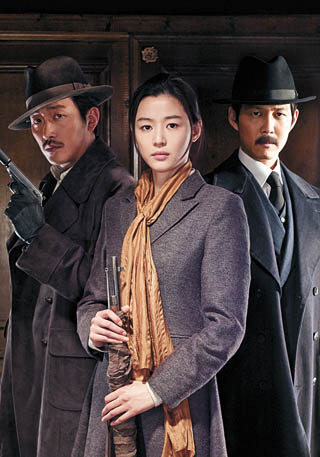 
Selecting the Japanese colonial era as the setting for a film is a double-edged sword for local directors.

While the romanticism of the 1930s may be appealing to some, there is a risk of upsetting viewers by misinterpreting historical events that many Koreans still feel sensitive about.

However, when director Choi Dong-hoon, known for making highly entertaining movies, delves into this period, it’s a different story.

Especially since he recruited some of the country’s A-list actors, like Jun Ji-hyun (Gianna Jun), Lee Jung-jae and Ha Jung-woo, it is hard for this movie not to be good.

He lures in An Ok-yun, a cold-blooded sniper played by Jun, and two other independence fighters (Cho Jin-woong and Choi Duk-mun) to carry out the plan in Gyeongseong, the old name for Seoul.

The trio may not agree on every point, but their dedication to their mission of achieving independence for the peninsula holds them strongly together throughout.

In order to convey the era more effectively, he let go of much of his usual style - speedy transitions of plots filled with comedic scenes - and replaced them with solid portrayals of each character’s determination.

However, even for a skilled director like Choi, letting go of what he knows best wasn’t easy.

“I wanted to make something classical that follows a traditional format instead of a witty one like ‘The Thieves’,” Choi said at a recent press event.

“I have long wanted to talk about the 1930s, but the screenplay didn’t come along easily. I discarded the screenplay I had been writing for a year and wrote it again,” he added.

But those who have admired Choi’s previous style, won’t be disappointed yet. His old ways didn’t disappear completely.

“I am very curious to find out about how others would see this movie. I think this movie is going to be a turning point in my career,” said Choi.

What's next for 'The Bull' in the Wolves' den?