New generation a threat and a blessing for regime

New generation a threat and a blessing for regime 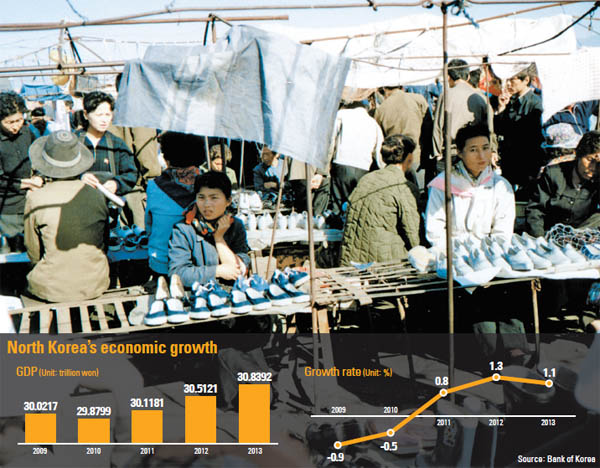 North Korea has continued on with its policy of developing its nuclear and missile program while touting economic growth, despite sanctions and pressure from the international community.

And threats from the United States and the United Nations regarding economic sanctions, halting food supplies and isolation do not appear to have deterred the Kim Jong-un regime.

Analysts point out that it is because Pyongyang has evolved to be able to adjust to economic difficulties and now has a new, thriving capitalistic-minded generation that, in turn, enables the state to focus on the development of its nuclear program.

“This can become a threat to the Kim Jong-un regime.”

The so-called jangmadang (market place) generation, which refers to those who came of age in the late 1990s amid economic uncertainty in North Korea, became adept at selling goods on the black market, adjusting to a market economy system.

This demographic accounts for 14 percent of the country’s population, which adds up to some 25 million people. More than ideology, they are concerned with earning a living and hold a strong tendency toward individualism, keeping up with and spreading foreign trends through mobile devices.

North Korea stands for regulations and a planned economy, which means this generation of market-minded people could pose a danger to the Kim regime, South Korea’s top spy agency said.

However, experts point out that these entrepreneurs are actually lifting the economic burden off Pyongyang in its push to advance its nuclear program.

“It wouldn’t be appropriate to anticipate that North Korea will collapse from hunger,” said a North Korea source who regularly meets with Pyongyang officials in China. “Now is the time to find a realistic North Korea policy.”

Kim Keun-sik, a political science and foreign affairs professor at Kyungnam University, added that the North Korean people who endured the famine in the ’90s do not rely on the state for food and manage on their own through the marketplace.

“It appears that even though the state is poor, the people can eat and live,” he said.

“In the Kim Jong-il era, when the national economy completely collapsed, people starved to death, and the country was busy trying to feed its people. But the people found their own way to live without relying on the state, and in doing so became a freer generation,” said Jung Chang-hyun, an adjunct professor of North Korean studies at Kookmin University. “From the perspective of Kim Jong-un, the regime can then use all of its budget for nuclear development instead.”

In other words, the more liberated market generation potentially poses a threat to the regime, while at the same time propping up Pyongyang’s nuclear ambitions. North Korea has shown little response to incentives offered by Beijing and Seoul, including crude oil, rice and fertilizer, because of its considerable economic stability.

“In North Korea, we are educated that after the Korean War (1950-53), the United States has continued to impose sanctions on North Korea, so we are living difficult lives, and we are used to sanctions and poverty,” said a high-ranking North Korean who recently defected to the South. “Tightening our belts is not as threatening to the regime as the international society seems to think.”

North Korea’s produced 2.7 million tons of food in 1998, when it was undergoing its worst economic crisis. Currently, it produces around 5 million tons.

The defector continued, “In the latter half of the 1990s, there were irrigation projects and a land readjustment project similar to South Korea’s Saemaul [New Village] Movement, so infrastructure for agriculture improved. Recently, two fertilizer factories were completed, and through the construction of a power plant, some of the food shortages and energy problems that developed during that time were resolved.”

People’s livelihoods have improved mainly due to anxiety that state food distribution could be cut off altogether, leading them to seek alternatives.

“North Korean people make a profit off the markets,” a South Korean intelligence source said. “In order to collect these profits from the markets, the state since 2000 has carried out currency reforms twice, but the people did not respond and it was not effective.”

And because economic uncertainty could arise again at any time, most people make deals using foreign currencies, a practice that is not regulated.

The source continued, “Even if the international community imposes sanctions, the North Koreans have tactics and methods to the point that they can even smuggle in automobiles, and they are importing in goods from overseas and selling them. They even sell Japanese Castella, Zojirushi rice cookers and Siemens refrigerators; there is no item that cannot be found in the marketplace.” As commercial activity increases, a small bourgeoisie with more than $50,000 has emerged, he added.

However, Professor Koh Yoo-hwan, a North Korean studies professor at Dongguk University, pointed out that after Kim Jong-un came into power, “he has set forth polices targeting boys and orphanages in order to buy the favor of the generation that will support him, while executing his aides, unfolding a policy of terror, and stabilizing his authority.”

“The marketplace generation can help him earn time for the stabilization of a nuclear regime, and because high-ranking officials are executed or purged, there are those who also gain a chance for promotion.

“But if there is regulation over owning private property, this can lead to disgruntlement, so it can be a double-edged sword for Kim Jong-un.”