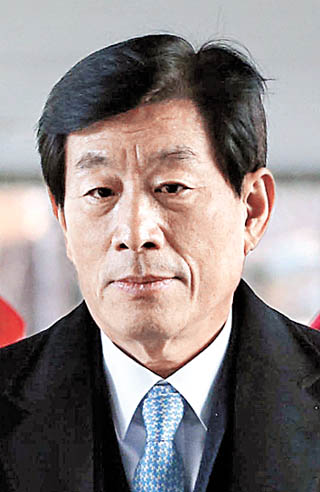 A final ruling on Won Sei-hoon, the former chief of the National Intelligence Service (NIS) convicted of meddling in the 2012 presidential election campaign, is likely to take a while, after the Supreme Court sent the case back to the high court on Thursday.

The highest court questioned the validity of some of the prosecution’s evidence in the initial trial and said the previous ruling should be reconsidered accordingly.

Won’s application for bail was denied as well on Thursday. He is in prison serving a three-year term.

At Won’s original trial in September 2014, the prosecution presented as evidence two confiscated documents attached in an NIS official’s e-mail, as well as 117,000 comments posted by the NIS on 175 Twitter accounts and 117 bulletin boards. The NIS was accused of a psychological-operation smear campaign against opposition candidate Moon Jae-in.

“The two documents suggested by the prosecution were unlikely intended for psychological warfare because the source is uncertain, and the documents have irrelevant content about travelling or getting jobs,” said the full bench. “We judge the documents cannot be considered evidence under the code of criminal law.

“We are sending the case back because the high court’s admission of the evidence was a misunderstanding of the code and affected the result of its ruling,” the judges continued. “We want [the high court] to redefine the coverage of psychological warfare [of the NIS].”

Won, who headed the top spy agency from 2009 to 2013, was prosecuted in June 2013 for meddling in the presidential election in support of Park Geun-hye, the ruling Saenuri Party’s candidate.

The prosecution submitted e-mail attachments confiscated from an NIS official named Kim in an attempt to prove the alleged crimes of Won and the NIS. The documents listed 269 Twitter account names and their usernames and passwords.

The initial ruling last September acquitted him of violating election law and only convicted him of breaching his responsibility to be politically neutral. In its ruling in February, the high court convicted him on both charges and handed down a three-year prison term.

During the initial trial, the Seoul Central District Court said the Internet posts were part of the team’s routine activity and there was no evidence that it was akin to election campaign activities. Won was given a two-and-a-half year jail term for the neutrality charge suspended over a four-year probation period.

Days before the presidential election on Dec. 19, 2012, the Democratic Party, the predecessor to the main opposition New Politics Alliance for Democracy (NPAD), claimed that certain government offices, including the NIS, had run an Internet smear campaign against its presidential candidate, Moon Jae-in.

The reactions from the lawmakers were polarized.

“The NIS must maintain political neutrality and must not enter political affairs,” Shin continued.

“We deeply regret that the Supreme Court avoided its responsibility,” said Yoo Eun-hae, spokeswoman for the NPAD.

“It just reminds us of the initial ruling, which was strongly criticized by people.”