Deal is done but both shares decline

Deal is done but both shares decline 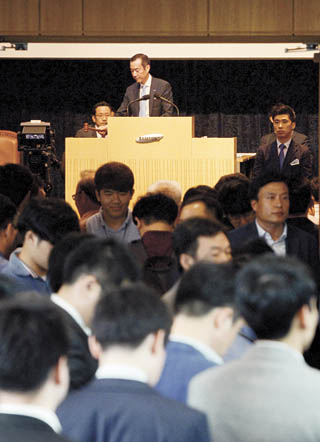 Shares in Samsung C&T and Cheil Industries tumbled Friday after shareholders of both the construction company and amusement park operator approved their merger. Some investors moved to lock in profits from recent double-digit gains, while others apparently decided to exit.

UBS was the third-biggest seller and Kiwoom Securities, a local brokerage popular among retail investors, was the top seller.

Cheil, the biggest beneficiary of the victory, also tumbled 7.7 percent as foreign investors dumped a net 28 billion won worth of stock.

“Cheil and Samsung shares have been on an upward rally for an extended period since the merger announcement,” said Han Byeong-hwa, an analyst at Eugene Investment & Securities. “Merger expectations have materialized today, and naturally there were profit-taking moves.”

Based on Thursday’s closing price, Samsung C&T had gained 25 percent and Cheil shares 19 percent since May 22, the last trading day before the merger was announced.

Analysts also said investors were growing more cautious as they waited to see ambitious promises made by company officials in their public pitch for the merger delivered.

“What investors are seeing now is the uncertainty. Will the company deliver what it had promised? They want to check that before making moves,” said Lee Seon-il, an analyst at Daishin Securities.

“Some investors may opt out at this point as many apparently have, and longer-term investors who really believe in this merger will stay put,” Lee added.

Cheil said in a recent investor relations session that the newly merged entity planned to see pre-tax profits of 4 trillion won by year 2020, 6.7 times their combined 2014 figures. It also promised a 30 percent dividend ratio, up from 21 percent in 2014.

Regardless of the fall in their share, the merger was still good for both companies, analysts said.

For Samsung C&T, Cheil’s steady cash-generating businesses - domestic consumption segments include food and fashion - would make up for the cyclicality of its construction and trading industries.

“The merger brings a steady revenue stream [for Samsung C&T]. The construction sector has a lot of ups and downs, and this will be a big winning point,” said Lee at Daishin.

Following the news of Samsung’s victory, the focus shifted to what the defeated hedge fund, known for its aggressive tactics, would do.

After the vote results came out, Elliott said it was “disappointed that the takeover appears to have been approved against the wishes of so many independent shareholders and reserves all options at its disposal.”

Associates with Elliott in both Seoul and Hong Kong said it had nothing further to say when contacted by the Korea JoongAng Daily.

Industry analysts say a range of options, including legal action to nullify the result of the vote, were available.