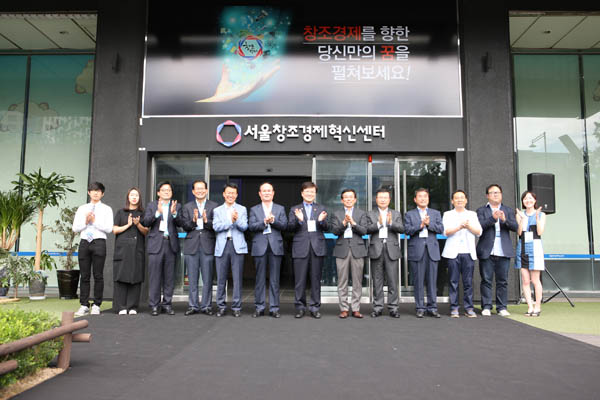 CJ Group CEO Lee Chae-wook, sixth from left, and Minister of Science, ICT and Future Planning Choi Yang-hee, to his right, celebrate the opening of the Seoul Creative Economy Innovation Center in the former KT headquarters building in Gwanghwamun, central Seoul, on Friday afternoon. Provided by the ministry

Instead of building a new center, the Seoul Creative Economy Innovation Center opened at the Dream Enter, a state-run start-up help center inside the former KT headquarters building. The new center will coordinate start-up assistance, venture capital and university networks in the city. About 150 people attended the Seoul center’s opening ceremony, including Choi Yang-hee, the minister of science; CJ’s head, Lee Chae-wook; and the new center’s chief, Park Yong-ho.

“Seoul already has plenty of resources needed in launching start-ups from private start-up assistance centers, experts and venture capital,” Choi said at the opening ceremony. “So all we needed to do was to open a place that connects existing resources and helps them cooperate.”

As Choi noted, 38 universities in Seoul have their own start-up assistance centers, and nearly 92 percent of Korea’s venture capital firms and 22 percent of its start-ups are located in the city. In addition, the metropolitan government runs 19 start-up fostering centers of its own.

While the new center supports early-stage start-ups in drawing up business plans in cooperation with private start-up assistance centers like D-CAMP and Google Campus Seoul, CJ Group is responsible for testing the marketability of new food products and services and helping their further marketing and retail distribution.

CJ Group is strong in food and entertainment. It says it will help start-ups flourish by marketing them through K-Pop and cultural events and expose them to potential foreign clients via popular events like the Mnet Asian Music Awards hosted by CJ or by arranging export consultations. The company plans to select start-ups that develop profitable business plans at the Seoul Center for exposure that this year’s music awards show in Hong Kong at the end of the year.

CJ also fosters start-ups in the food delivery and restaurant reservations business, and in diner rating sites using a restaurant database available from the city government.

The company and the city government will encourage fashion start-ups and support local fashion designers in developing retail networks in and outside the country by promoting the new businesses at Seoul Fashion Week.