In Jeolla county, child care made a No. 1 priority

In Jeolla county, child care made a No. 1 priority 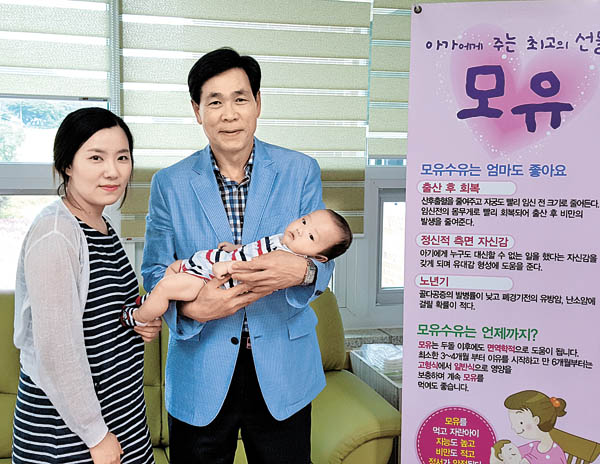 For three years, a local newspaper in Haenam County, South Jeolla, has included a section in its pages devoted to showcasing the area’s newborns.

“We love you, Yeon-ah. We wish you happiness and health. Dream high. Daughter, we will always love you,” read one recent submission, which was accompanied by the infant’s photo.

Since its inception, the section - initiated at the suggestion of the Haenam County Health Center - has drawn positive reactions from parents and readers alike.

“I thought it would be nice to celebrate the birth of a baby with other residents,” said the center’s director, Kim Chung-jae.

The 57-year-old was recently recognized at an event to commemorate the fourth annual Population Day Ceremony, held July 10 in Seoul, for his contributions in raising the county’s birthrate.

The change in the county, meanwhile, has been attributed to efforts by the local government.

Tasks related to childbirth in Haenam were previously separated across the county hall, the community service center and the health center. But in 2008, all such responsibilities were shifted to the county’s health center, and Kim formed a team tasked with overseeing local births - the first time an administrative office has been established in the country for that purpose.

Since then, the team has come up with policies that focus on parents raising babies.

It offers seaweed and a kilogram (2.2 pounds) of beef to new mothers and provides a free naming service for newborns, with participation from local elders skilled at traditional fortune-telling. Since 2009, about 600 babies have obtained names through the service.

“Providing aid every month helps parents purchase necessities to raise their children,” Kim said. “Right now, I feel so great to have worked as a public servant for the past 37 years. I understand the happiness babies bring to families, as I also have four children. So it is so refreshing to see such good results in our attempt to share in that happiness.”