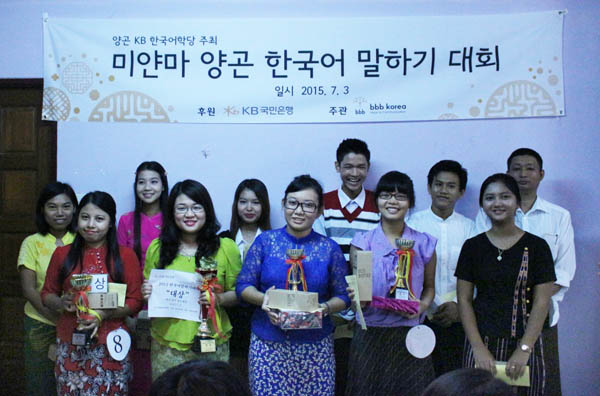 From left, first row: Thwe Thwe Win, Thazin Nwe, Mey Kham Eain and San Sumyat, who all placed in the Korean-speaking contest hosted by the Yangon KB Korean Language Learning Center in Myanmar, show off their awards. By Park Min-je

Among the 10 participants, the 24-year-old took the top prize, explaining in fluent Korean what had initially inspired her to learn the language. Throughout her nearly 10-minute speech, she refrained from reading her script.

“I began learning Korean during my teenage years to watch Korean dramas without the subtitles and understand the songs by [the K-Pop band] JYJ,” Thazin Nwe said.

By learning Korean, she said she was able to enjoy watching the KBS series “Producers,” which aired from May to June. It also sparked her interest in other aspects of Korean culture - its food, clothing and sports.

Thazin Nwe originally wanted to pursue architecture and study civil engineering, but after learning Korean, she now aspires to work as an interpreter.

The Yangon KB Korean Language Learning Center, established by the non-governmental organization BBB Korea with sponsorship by KB Kookmin Bank, has seen about 400 students pass through its 10-week curriculum since opening in 2013.

Every semester, more than 100 people enroll in the course.

Initially, most students enrolled in the class aspired to work as foreign laborers in Korea, though now their motivations for learning Korean have become more diverse, due in large part to the increasing popularity of Korean TV dramas, the learning center said.

“The maximum number of students in the Korean-language program at Yangon University of Foreign Language has expanded from 40 to 80, and there are about 60 private institutes teaching Korean in the city,” said Choie Mee-hei, the executive secretary of BBB Korea.

“It’s [our] goal to provide high-level [Korean] courses at a low cost.”

During the competition, which was attended by about 50 students, the nine other participants also expanded on their affections for Korea.

Thwe Thwe Win, who came in second, explained how she and her friends hold a birthday party on Jan. 26 each year for Kim Jae-joong, a member of JYJ.

“We eat birthday cake and listen to Jae-joong’s songs, and have a great time,” she said.

The first place winner is awarded an eight-day trip to Korea.