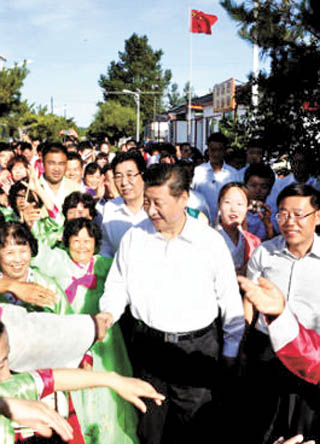 Chinese President Xi Jinping, center, is welcomed by residents in his first visit to the Yanbian Korean Autonomous Prefecture of China on Thursday. [XINHUA/NEWSIS]

Xi’s visit to the prefecture that borders North Korea is considered a signal that he wants to improve the strained relations with the North Korean regime.

“We need to have a closer look, but the main reason is likely [the relationship with] North Korea,” said Pang Zhongying, a professor of international relations at Renmin University of China. Relations between Beijing and Pyongyang have been chilly since the North carried out its third nuclear test in February 2013 - which China warned against - and North Korean leader Kim Jong-un executed his uncle Jang Song-thaek, who maintained close relations with China’s leadership.

In April, Xi invited Kim to a military parade to commemorate the 70th anniversary of the end of World War II in Beijing on Sept. 3. His visit Thursday was considered an effort to make a friendlier atmosphere ahead of Kim’s possible visit. Analysts say Xi’s trip on Thursday also suggests that he wants to strengthen economic ties with the North as China develops its One Belt, One Road initiative.

“The visit may mean that Xi is willing to extend the eastern part of the over-land Silk Road to include Russia, Mongolia and North Korea,” said Jin Caorong, a professor at Renmin University’s International Relations School. “The over-land Silk Road basically goes west from Xi’an, Shanxi, but China is trying to include its northeastern area and bordering countries as well.”

In remarks at the National People’s Congress in March, Xi also gave advised prefectures on the borders to strengthen economic cooperation with neighboring countries, including Yanbian, Tumen and Hunchun Prefectures.

As of 2014, the total population of Yanbian Prefecture was 2.15 million and Korean-Chinese account for 36 percent, or 770,000. If the ratio goes below 30 percent, the prefecture will be stripped of its autonomous status.

“Xi might be taking a preemptive action as the prefecture’s Korean-Chinese population, which was nearly two million in the 1990s, is now less than half,” said Prof. Son Chun-il of Yanbian University.