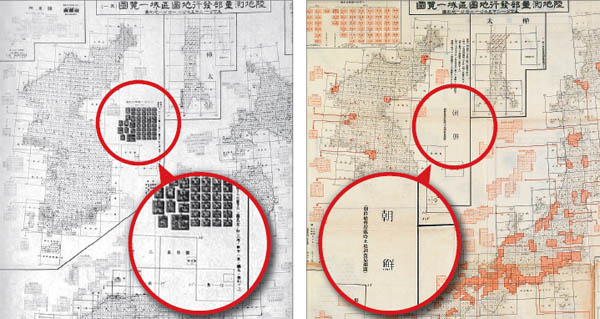 A map issued by the Japanese Army in 1936, left, shows Dokdo drawn within Korean territory. But Japanese scholars have argued that for convenience’s sake, Dokdo was depicted near Korea. A similar map drawn up the next year, right, directly names Joseon, the name of Korea at the time, where Dokdo was categorized. Provided by Cultivate Korean Culture

A local culture organization recently announced that it will publish a book showcasing Japanese maps that contradict Tokyo’s assertion that Dokdo has historically belonged to Japan.

In a country where the psychological wounds inflicted by Japanese colonial rule remain raw, the territorial dispute over a set of islets in the East Sea known as Dokdo runs much deeper than what can be seen.

Korea links Dokdo with a barrage of other issues dating back to the early 20th century, when women were forced to work as sex slaves for Japanese soldiers and prisoners of war were subjected to brutal medical experiments.

With Japanese Prime Minister Abe now set to propose a statement next month marking the 70th anniversary of the end of World War II, Seoul is closely monitoring whether the right-wing politician will reflect past apologies by Japanese statesmen, which he has yet to do.

Both countries go centuries back in outlining reasons to their claims over Dokdo, with Japan chiefly relying on an instance in 1905 when it incorporated the island as a part of its territory during the war with Russia.

Seoul at that time was deprived of the chance to lodge a diplomatic complaint because Japan coerced the country to sign a treaty that made it a protectorate of Tokyo, effectively stripping it of such rights.

Many maps presented in the soon-to-be released book, however, show that the Japanese government failed to recognize Dokdo as its own territory after 1905.

A map dated in 1936, issued by the Japanese Army’s survey department, shows Dokdo included in Korean territory. The government branch again drew up a similar map the following year directly categorizing it under Joseon, the name of Korea at the time.

“Japanese scholars have claimed the inclusion was made out of sheer convenience [because Dokdo is geographically located closer to the Korean mainland],” said Han Cheol-ho, a history education professor at Dongguk University. “But when looking at the map drawn out in 1937, much later than 1905, it goes to show that the Japanese government continuously acknowledged that Dokdo belongs to Korea.”