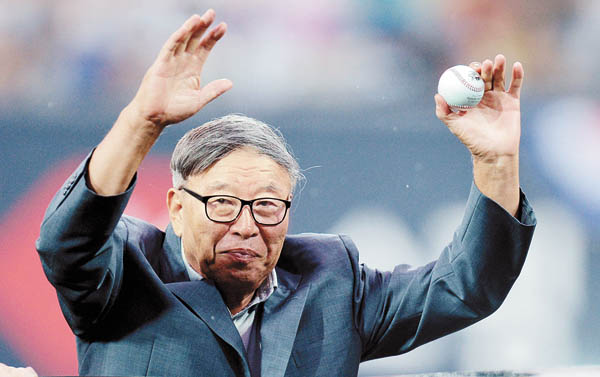 At the 2015 Korea Baseball Organization (KBO) All-Star Game, the players weren’t the only ones in the spotlight. Former Hanwha Eagles manager Kim Eung-yong was given a retirement sendoff by the country’s top baseball stars and managers from all 10 clubs.

At the Suwon KT Wiz Park in Suwon, Gyeonggi, on Saturday, Kim was the ceremonial pitcher of the All-Star Game. Wearing a grey suit, the 73-year-old didn’t hesitate to pitch to Sun Dong-yol, who played catcher. Sun, one of the KBO’s greatest pitchers in history, was coached by Kim when they were at the Haitai Tigers (now the Kia Tigers).

After the pitch, Kim was ready to says his farewells but couldn’t as managers from 10 KBO clubs surrounded him. Hanwha Eagles manager Kim Sung-keun handed Kim a special trophy, while NC Dinos veteran hitter Lee Ho-joon delivered an appreciation plaque on behalf of the Korea Professional Baseball Players’ Association. The Tigers OB group also gave him an appreciation plaque.

“I really appreciate that our respected managers have prepared this kind of event,” Kim said. “Baseball fans, I will live life to the fullest. Thank you.”

Kim holds the most wins and Korean Series titles in KBO history. Starting with the Tigers in 1983, he managed the Samsung Lions and then the Hanwha Eagles until last year. In 2,935 games, he had 1,567 wins, 1300 losses and 68 draws, while grabbing 10 Korean Series titles.

The former Hanil Bank player and manager also helped Korea win a bronze medal in the 2000 Summer Olympics. From 2005 to 2010, Kim also served as the CEO of the Samsung Lions, leading the club to two Korean Series titles.

“Instead of the most wins,” he said, “what I’m really proud of is the 10 Korean Series titles.”

Kim didn’t leave the stadium after receiving his trophies and plaques because he was temporary manager for the Nanum All-Star team for the first inning.

There was also a little prank by the KBO managers.

In the first inning, the Dream All-Star’s Choi Hyoung-woo got a close safe call on first base. The Nanum All-Star coaches urged Kim to ask the umpire for a video replay to challenge the call.

“As I approached the umpire, he actually scolded me, saying that there are no video instant replays in the All-Star Game,” Kim said. “I was fooled by the younger managers.”

After his contract with the Eagles ended last year, Kim has been enjoying life outside the world of baseball. He said he doesn’t even watch the KBO League games.

“I get tension even if I hear the word ‘baseball,’ so I just do farming these days,” he said.

But when asked about his most memorable moment as a manager, Kim recalled his first Korean Series victory with the Haitai Tigers in 1983. The Tigers beat MBC Blue Dragon (the predecessor of the LG Twins) in the best of seven series to become the first KBO champion.

Though he did manage the Lions and led the Daegu-based club to one Korean Series title, Kim seems to be most fond of his work with the Tigers, with whom he won nine Korean Series titles. When asked who were the most memorable players, he mentioned two former Tigers players: Sun and Lee Jong-beom.

“Sun Dong-yol was the best pitcher, but when you think about the best batter, I will pick Lee Jong-beom,” he said.

The legend of Korean baseball had one last piece of advice for today’s players.

“I think compared to the past, players these days lack a strong mentality,” he said. “Back in the day, players played like there was no tomorrow. I hope players show more fighting spirit than we normally see now.”