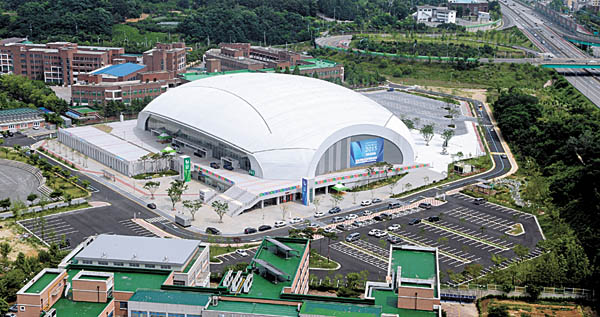 The Nambu University International Aquatics Center in Gwangju is the main venue for the 2019 World Aquatics Championship. [NEWSIS]

It’s been long time since the hosting of international sports events was considered a golden goose. It’s more like a money pit.

The hosting of winter Olympics by Sochi in Russia and Nagano in Japan are just two examples of host cities that struggled to recover after the athletes went home. Incheon, which hosted the Asian Games last year, is an example as well.

The 2015 Gwangju Summer Universiade ended its 12 days of events last Tuesday, but Gwangju is trying to be an exception to the rule. The city, which is about 290 kilometers (180 miles) south of Seoul, is trying to find future uses for the facilities it built.

The organizers were recognized all along for their cost-saving efforts.

Among 69 venues for the games and training fields, only three facilities - the Nambu University International Aquatics Center, the Gwangju International Archery Center and the Kwangju Women’s University Universiade Gymnasium - were built from scratch. The Jinwol International Tennis Court was expanded.

The Nambu University International Aquatics Center is already waiting to host another major international event: the 2019 World Aquatics Championships. Gwangju was awarded to host the event in July 2013 by the general congress of FINA, the governing body of aquatics sports.

The Gwangju organizers said the 3,290 seats can be boosted to 15,000 by adding temporary seats, while both elite swimmers and normal visitors can use the swimming pools.

Nambu University points out that the facility has both swimming pools and restaurants, a cafe, a library and sport goods stores, so it can be used in many ways.

The Kwangju Women’s University Universiade Gymnasium, where gymnastics were played during the Summer Universiade, will be used for a variety of indoor sports, including basketball, volleyball, badminton and table tennis. In the basement, an ice rink will be added, providing a venue for figure skating and ice hockey.

When there are no sports events, the gymnasium can be used to host concerts and musical performance because its sound system is as good as a concert hall’s, according to organizers. Removable seats on the first floor allow the seating capacity to be changed from 8,314 to 7,940, depending on the need.

The Gwangju International Archery Center is a facility that meets international standards, in which 64 archers can compete at the same time. But when there are no archery events, grass can be laid for two football fields. It has a money-saving geothermal heating and cooling system.

The organizers said the Jinwol International Tennis Court, which has a total of 16 tennis courts, will be opened to the tennis-playing public.

Analysts say that post-Universiade plans for Gwangju should serve as an example for organizers of the 2018 Pyeongchang Winter Olympics. Because the country doesn’t have a big infrastructure for winter sports, the Gangwon region is building new facilities for the quadrennial event.

The construction of new sports facilities is estimated to cost more than 700 billion won ($608 million).

“The Gwangju Universiade was a successful event that satisfied the local community and enhanced the local sports infrastructure,” said Kim Do-kyun, who teaches sports marketing at Kyung Hee University. “I think organizers of the Pyeonchang Winter Games should actively benchmark its successes.”