Review: From Holocaust survivor to hero

Review: From Holocaust survivor to hero 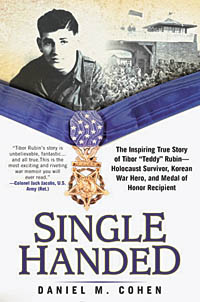 After surviving the Holocaust and a year in a notorious Nazi concentration camp, Tibor Rubin fought as a U.S. Army infantryman in Korea, displaying the kind of raw courage associated with Hollywood war movies and going on to spend more than two years as a prisoner of war.

The bravery displayed by the Hungarian-born Jew in singlehandedly repelling an assault by hundreds of North Korean troops and capturing scores of enemy soldiers in a subsequent encounter went unrecognized for more than 50 years. His commanding officers recommended Rubin for the Medal of Honor, but his sergeant - a virulent anti-Semite - refused to send in the papers. The commanders were killed in combat and Rubin’s acts of courage were forgotten.

That wrong was finally corrected in 2005, when a decades-long campaign involving soldiers who fought alongside Rubin and were with him in a Chinese-run POW camp came to fruition as President George W. Bush presented the 76-year-old veteran with the nation’s highest award for valor.

“Single Handed” is a story of endurance, bravery and determination that rivals that of Louis Zamperini, the hero of Laura Hillenbrand’s “Unbroken,” the best-seller about a World War II aviator who survived 47 days on a life raft in the Pacific before being held captive and tortured in a Japanese prison.

At the behest of his parents, who perished in the Holocaust, Rubin tried to flee the Nazis but was stopped at the Swiss border and sent to the Mauthausen concentration camp. Starvation, disease and the ever-present threat of execution was rampant, but the 14-year-old stayed alive by stealing food leavings discarded by guards. This, among other survival skills, stood him in good stead when he pilfered food for fellow POWs in North Korea and kept up their spirits.

Rubin was skeletally thin and barely conscious when American troops liberated Mauthausen and a compassionate Army nurse helped him regain his health. He decided then that he wanted to emigrate to America, a dream that became reality after three years in a displaced persons camp.

He hoped to serve his new country by joining the Army, but failed the admission test for lack of fluency in English. When he finally was accepted, he was sent to Korea at the outbreak of war in 1950 and fought to stave off the initial onslaught of Communist forces. His sergeant repeatedly “volunteered” Rubin for the most dangerous missions, an apparent attempt to get him killed.

Daniel M. Cohen’s descriptions of Rubin’s exploits recall those of the heroic Sgt. Alvin York in World War I and Hollywood heroes like Rambo. Even after he was captured when waves of Chinese forces entered the war from the north, Rubin inspired fellow POWs to keep up hope that they would survive the ordeal and return alive.

After his release, Rubin brushed his war experiences aside, started a family and went on with his life. But decades later, he resumed contact with other soldiers who had been with him at the time and was persuaded to go along with their efforts to get the Department of Defense to recognize his bravery.

“Single Handed” concludes with the campaign on Rubin’s behalf that finally ended when he received the much-deserved recognition that he never sought. Readers cannot help but be inspired by this portrait of a good-humored and self-effacing man whose inner strength got him through ordeals that most would find unimaginable. AP