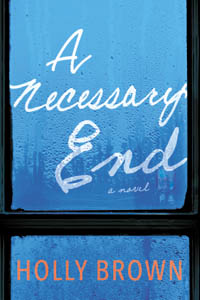 The desire for a child - an occasion that should be joyful - turns into a deadly obsession in the highly stylized “A Necessary End.” In the “Gone Girl” mode, author Holly Brown fashions her second novel around three unlikable, but interesting people, making us care about the twists this domestic thriller takes.

Adrienne has decided that she and her husband, Gabe, who have been together since they were teenagers, should be parents. Unable to conceive, this second-grade teacher plunges into the world of adoptions, signing up for online sites where the couple can be contacted by birth mothers.

Gabe isn’t so sure about having a child - he’s happy with his life and marriage. He also worries how the dynamics of a child will affect their relationship, and if they can afford a baby. His job as a car salesman isn’t doing well, nor is his sideline as a poker player. He also keeps reminding Adrienne about how a previous birth mother they met online broke their hearts.

But Adrienne is consumed with adoption, ignoring the obvious warning signs when 19-year-old Leah answers her ad. Due in six weeks, Leah wants to travel immediately to their suburban San Francisco area home. But the adoption comes with a price - Leah will live with and be supported by the couple for a year before she will decide if they can adopt her baby. This emotional investment may be more than the couple is willing, or able, to pay.

Brown cleverly pits each character against the other as they form an odd triangle, each jealous of the other’s attention to the other, that intensifies when the baby is born. Leah is immediately overly flirty to Gabe and standoffish to Adrienne, to whom she bears an uncanny resemblance.

Brown adds layer after layer to this well-constructed psychological drama, showing the unchecked emotions seething just below the surface.

A clever twist that comes late in the story takes the story to a different level and gives insight into the characters. Violence can erupt when it’s least expected, even though all the clues were hiding in plain sight. “A Necessary End” illustrates how watching unsympathetic people battle each other can be satisfying.