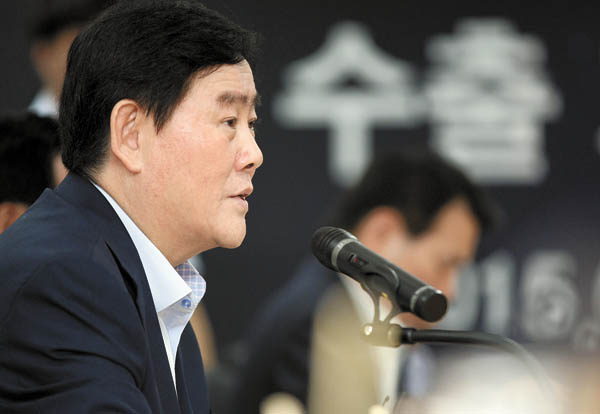 When Finance Minister Choi Kyung-hwan took office in July 2014, expectations were high for the politician-turned-minister with huge influence in the political arena. Officials and businessmen alike were sure he would do something to salvage an economy suffering badly from the post-Sewol ferry disaster slowdown in consumption.

As a core member of the so-called pro-Park Geun-hye faction in the ruling Saenuri Party, referring to supporters of the president, the three-term lawmaker was a former floor leader of the party when he was named finance minister and deputy prime minister for the economy.

Choi was expected to wield power over a broad range of government organizations, even the Bank of Korea (BOK). At the Ministry of Strategy and Finance, he was right at home: He was an official there before he went into politics.

Just weeks after he took office, Choi announced a package of measures to boost the domestic economy, dubbed the “July 24 measures.” They included a 41 trillion-won ($35 billion) stimulus package; relaxing the debt-to-income and loan-to-value ratios on mortgages to boost the real estate market; and three tax incentives for households.

The central bank also made similar moves to revive the economy. Since July 2014, the BOK cut the key policy rate four times, from 2.5 percent to a historic low of 1.5 percent in June.

The first sector that responded to these measures was real estate. According to statistics by the Ministry of Land, Infrastructure and Transport, the number of residential real estate transactions in July 2014 was at 73,535, which rose to 110,383 last month.

According to a survey by the JoongAng Ilbo, an affiliate of the Korea JoongAng Daily, seven out of 10 specialists said Choi’s biggest accomplishment has been breathing life into the moribund real estate market.

“He prevented the collapse of Korea’s real estate market,” said Sung Tae-yoon, an economics professor at Yonsei University. “He showed his will to normalize the market, and made some impact.”

“The Finance Minister and other government organizations in charge of economic policies cooperated with each other, moving in the same direction,” Kim said. “Also, he maintained a good relationship with the central bank.” 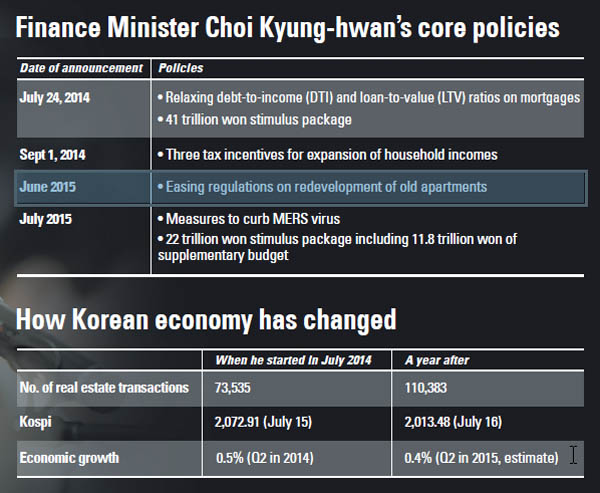 But the Korean economy has not shown much improvement.

Inflation plunged below one percent in Dec. 2014 and has stayed near zero, raising concerns about deflation.

Sluggish exports were a major concern to Choi. With falling global oil prices and the strengthening of the Korean won against other currencies, such as the Japanese yen, export growth has been negative since January, and exports shrunk 10.9 percent in May year-on-year.

A number of international organizations downgraded their economic outlooks for Korea. In April, the International Monetary Fund lowered its forecast for 2015 from 3.7 percent to 3.3 percent. After the Middle East respiratory syndrome (MERS) outbreak, the BOK cut its forecast to 2.9 percent. Other private research institutes also forecast growth below three percent for 2015. The Finance Ministry sharply cut its rosy outlook of 3.8 percent, announced in Dec. 2014, to 3.1 percent in June.

Pyo Hak-gil, an honorary professor of economics at Seoul National University, said Choi could not deal with the weak yen and strong won, which hit Korean exporters hard.

“The fact that he couldn’t handle sagging exports due to a weak yen resulted in sluggish output by Korean manufacturers,” Pyo said.

He pledged to reform the labor sector by improving the so-called “duality in the labor market,” the gap in working conditions between conglomerates and small- and medium-sized companies, and also between salaried and contract workers.

Raising “flexibility in the labor market” was another one of his pledges, making it easier for companies to lay off underperforming staff. Adopting the so-called peak wage system was another ambition, to gradually cut wages of salaried employees as they near retirement so companies can afford to hire more entry-level workers. Youth unemployment is a deepening problem in Korea.

However, the MERS outbreak knocked the urgency out of Choi’s reforms and also dampened domestic consumption, particularly in the service sector, and scared away tourists. 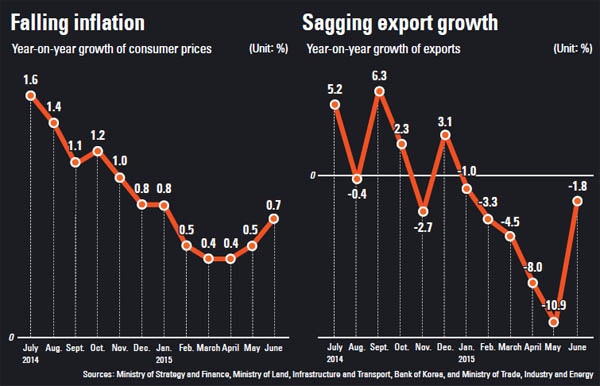 Unions protested the peak wage system plan, saying they did not believe it would lead to job creation for young people. They thought companies just wanted to pay workers less.

Analysts say Choi could not push his reforms as fast or as hard as he intended.

“He was very eager to carry out the reforms and the direction was correct,” said Bae Sang-geun, vice president of the Korea Economic Research Institute. “But he couldn’t get as much traction as was expected.”

Choi himself admitted the slow pace of reforms.

“I hoped there would be more achievements in the reform plans for four sectors so that people could actually feel they were working,” Choi told reporters at a meeting on July 7. “In particular, I tried to convince people that we should do something for young people [through labor reforms].”

Government-led negotiations between management and unions over labor reforms failed in April.

“Choi should not be dragged down by unions’ demands anymore,” said Cho Dong-geun, an economics professor at Myongji University. “He should convince the public of the necessity of his reform plans, particularly resolving the duality in the labor market.”

Lee Geun-tae, a researcher at the LG Economic Research Institute, said, “He should mull fundamental solutions for structural reforms and boost Korea’s service industry at the same time.”

“Choi needs to support foreign exchange hedges for SMEs (small and midsize enterprises) hurt by the strengthening of the Korean won against other currencies,” said Oh Jeong-geun, an IT finance studies professor at Konkuk University.

Some analysts warned that Choi should worry about the rapidly rising household debt situation, which is partly due to the eased regulations on borrowing to buy real estate. Household debt was nearing 1,100 trillion won as of the second quarter.

“The current revitalization of the real estate market could be turned into a bubble in the market,” said Jeon Seong-in, an economics professor at Hongik University.

“Rather than boost the economy by focusing on the real estate market, it would be better for Choi to support SMEs or start-ups and slow down the speed of growth in household debt,” said Kang Kyeong-hun, a business administration professor at Dongguk University.