Narrow focus pays off for 3 asset managers in 1st half

Narrow focus pays off for 3 asset managers in 1st half

Department stores are convenient for shoppers because of the wide range of products. But for customer satisfaction, they cannot beat specialist shops.

It appears that in the first half of the year the same applied to the mutual fund market. Like department stores, asset management companies that sold everything performed worse than those that chose a niche and focused on it.

A review of the fund market in the first half by the JoongAng Ilbo, an affiliate of the Korea JoongAng Daily, and the fund evaluation service Zeroin showed that three of the five top-performing asset management companies managed four funds each or fewer. Most companies in the business have a stable of between 20 and 30 funds under their management.

Lazard Korea Asset Management, which ranked No. 1 and returned 41.23 percent to investors, managed only a single fund.

In the first half, the Kospi index rose 8.28 percent; the average return posted by equity funds was 12.11 percent.

The Lazard Korea equity fund was formed in October 2008. Since then, it has shown a cumulative rate of return of more than 182 percent. Despite the dizzying figure, Lazard Korea didn’t get much attention in the market largely because the investment amount it handles is so small. In March, the fund had 9.7 billion won ($8.4 million) under management.

Something happened in the first half, though, and beginning in April, investors began to pour money into it. This helped boost the managed investment to 33.7 billion won by this month.

Dong Il-kwon is CEO of Lazard Korea Asset Management and also manages the fund. He has a long-standing relationship with Meritz Asset Management CEO, John Lee, with whom he worked for 20 years.

In 1991, the U.S. company Scudder Investments began to manage the $1.5 billion Korea Fund, the first to give foreign investors a pure play in Korean stocks. The fund was being managed by Lee from Wall Street, while Dong, who at the time was at Daewoo Capital Management, was adviser to the fund in Korea. Since then, the two continued to work together even after Scudder was bought by Deutsche Bank. In 2005, both joined Lazard Korea Asset Management before Lee moved on to Meritz. Perhaps because of that long collaboration between the two managers, the funds at Lazard Korea and Meritz have similar traits.

According to Zeroin, the two funds don’t invest in Samsung Electronics, a decision that means their performance is delinked from that of the Kospi index. Funds that benchmark the Kospi or are true index funds would have to invest more than 10 percent of their assets in the electronics giant because its market cap is 15 percent of the Kospi.

In its first quarter management report, Lazard Korea said it has not held Samsung Electronics in its portfolio since the European sovereign risk crisis in 2011. Lazard made the decision, it said, after reviewing global economic trends and Korean industries’ structural competitiveness. In short, that means Lazard thinks Korean conglomerates are less competitive in the changed economy of the last four years, which shows little sign of recovering. Competition from new Chinese industries is also a factor.

Lee of Meritz agrees. “We’re benchmarking the Kospi index to evaluate our performance,” he said. “That doesn’t mean we’re using it as the basis of our fund management decisions.

“As an active fund, we are freely investing in companies that could generate profits in the next five to 10 years and are not restrained by how much or how little influence it has in the market.”

Another similarity between Lazard and Meritz is that their funds have more investments in Kosdaq companies than other ordinary equity funds, which generally concentrate heavily on large caps.

As of April, Lazard Korea had put 25 percent of its funding in Kosdaq shares; the figure at Meritz was 31.5 percent.

Compare those numbers, for example, with the strategy of AssetPlus’ Korea Rich Together fund, which invests less than 10 percent of its assets in Kosdaq issues.

Lazard and Meritz also share a similar investment philosophy. Both prefer long-term investments and are meticulous about investigating the companies’ business models, as well as management capabilities.

The commonalities also extend to management style. They shun a hierarchical framework and encourage communications as equals among the staff.

Meritz in particular underwent some major changes since Lee joined the company.

Before his arrival, the firm had been struggling with industry-lagging performance year after year and lost money in several years. Lee turned the situation turned around, and in 2014, the company reported the second-highest profit in the industry, 14.9 percent. 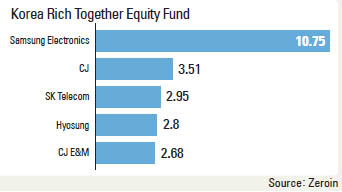 “I moved to Meritz to change an industry where asset management firms were more focused on short-term investment,” Lee said. “I wanted to plant a long-term investment culture.”

He said he chose Meritz because of the challenge of turning the bottom-dwelling company into the No. 1 in Korea.

At Meritz, Lee stressed to his new employees that the only way they can find new investment opportunities and avoid doing things like everyone else is to look for differences in companies. For a change in atmosphere, he relocated the corporate offices from Yeouido, where most brokerages and asset managers are located, to Bukchon in central Seoul. He also shook up the working environment by, for example, introducing flexible working hours.

All those changes seem to have paid off. Capital under management by the company rose by 812.1 billion won; at all management firms excluding his, there have been net outflows of 7.3 trillion won.

The Asset Plus Korea Rich Together Securities Master Investment Trust (Equity) is different from Lazard and Meritz’ funds, and not only in its ponderous name. For starters, it has 10.75 percent of its managed funds in Samsung Electronics.

“We’re investing in Samsung Electronics, not because the prospects are bright, but rather to reduce volatility in returns,” said Choi Kwang-wook, chief investor at AssetPlus Investment.

It also follows a management philosophy of owning industry leaders, and so holds 75 percent of its investments in large caps.

Market experts say that makes the fund’s 19.6 percent return in the first half quite impressive, considering that small and medium issues thrived in the market and large caps struggled.

AssetPlus also excelled in its investments in value stocks, ones that are considered undervalued in relation to their fundamentals.

“Because the global economic recovery failed to reach expectations, growth stocks such as bio and cosmetics, which have structural growth potential, thanks to the increasing elderly population and the expanding Chinese market, saw a rise in value,” said Hwang Yoon-ah, a Zeroin researcher. “Asset management firms that invested in value stocks posted lukewarm results.”

For example, Korea Investment Value Asset Management and Shinyoung Asset Management, which are known for their focus on value stocks, reported returns of 6.3 percent and 11.2 percent in the first half.

“Although our aim is to invest in value stocks, we took an interest in companies whose stock value might drop in the future rather than in ones whose current valuations are low,” said Choi of AssetPlus.

One such investment is the fund’s investment in CJ E&M; it holds 2.7 percent of the game and entertainment company, the fifth-largest concentration of the fund’s assets.

“On its balance sheet, the company hardly makes a profit, and is usually avoided by value funds,” Choi said. “But we have decided to put the company in our portfolio because we think it can adapt well to changes over time, such as the growing number of Chinese consumers and the expanding mobile market.”

Kang Bang-cheon, CEO of AssetPlus, is a legend in the fund management industry, earning his spurs by making 10 billion won from a 1 billion-won investment in 1998 during the Asian financial crisis, Korea’s first real experience with a panicked market.

In 1999, he founded AssetPlus, which was an investment consulting firm at the time. In 2008, he converted it to an asset management company and has instituted other changes, including relocating its offices to Pangyo, Gyeonggi. The tinkering is still going on; employees all have English names that are used in the office, another attempt to knock down hierarchy and improve internal communications.