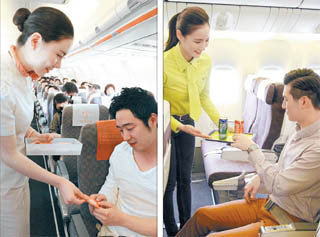 Left: Jeju Air provides a hand sanitizer to all passengers. Right: Jin Air offers seats that have 15 centimeters (5.9 inches) more legroom for an additional charge. Provided by each company

Jin Air, Korean Air’s budget airline subsidiary, announced July 8 that it will be launching service from Incheon to Honolulu by the end of this year. The flight to Hawaii is long, around nine and a half hours. Jin Air will become Korea’s first low cost carrier (LCC) to fly to Hawaii.

Jin Air has set the lowest price on a round-trip ticket to Hawaii at 559,600 won ($487.61). That’s half the price offered by Korea’s two major airliners, Korean Air and Asiana.

“Starting with Hawaii, we are planning to expand our long-distance routes,” said a Jin Air official.

Korea’s LCCs are going long-haul, going beyond no-frills service and ramping up other marketing efforts to compete against the big boys in the skies. 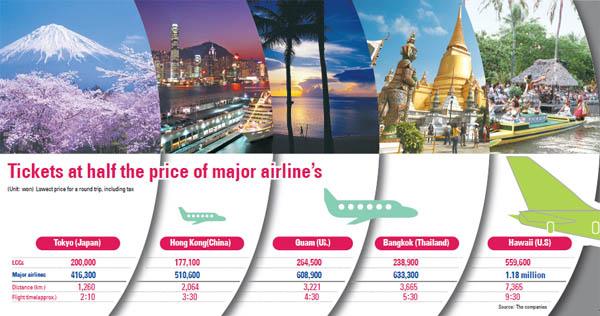 The country’s No. 1 budget airliner Jeju Air is providing a service called “cocktail kit” which allows passengers to fix their own drinks in a so-called in-flight cafe. The service is a summer vacation promotion and only offered on flights to Southeast Asia, Guam and Saipan.

The budget carrier is serving red rice with chicken and chicken kelaguen, native dishes of Guam and Saipan, in its meal service.

Less appetizing, Jeju Air is also giving out disposal “MERS sanitation” kits on all of its flights in the wake of the Middle East respiratory syndrome (MERS) outbreak. This is a distinctively different marketing approach to the larger carriers, which merely offer hand sanitizers on board their planes.

“We are taking special care in providing services and delicacies to satisfy the particular tastes of our customers,” said a Jeju Air official.

On long-distance international flights, the budget carriers in recent years have been offering free light snacks such as kimbap, or triangular-shaped rice balls, or sandwiches. Now they are starting to offer meals that are the same quality as on bigger airliners. Unlike the major airliners, budget carriers charge customers separately for the meals.

“I don’t see a big difference with major airliners as budget carriers now offer steaks and bulgogi, and the in-flight meal comes with wine,” said Chun Joon-hee, a 38-year-old office worker who frequently travels to Southeast Asia with relatives.

Some budget airlines have improved their seats in order to attract more customers. Jin Air has installed “plus seats” on some of its flights to differentiate itself from other budget airlines. For an additional fee, passengers in coach will get six inches (15 centimeters) more space between the seat in front of them.

Jin Air and T’Way Air adopted a seat selection service that allows passengers to choose more seats with greater leg room - like seats next to emergency exits or at the front of the plane - if they pay an additional fee.

The biggest change in recent years is a significant increase in destinations. The first destinations budget airlines expanded to were Guam and Saipan, which in the past were Korean Air and Asiana’s exclusive routes. Since then the budget airlines have included Bangkok, Kuala Lumpur and Kota Kinabalu. Hawaii is the farthest destination.

The fact that destinations are growing is proof of the popularity of budget airlines.

According to the International Aviation Transport Association (IATA), flights to Asia including China and Southeast Asia grew 5.5 percent, higher than the average growth of the global aviation market of four percent.

In the first quarter of 2013, flights to other Asian countries by Korea’s five LCCs - Jeju Air, Jin Air, Air Busan, Easter Jet and T’Way - was 9.4 percent of all international flights. That figure grew to 12.1 percent in 2014, and this year it has gone up to 13.2 percent.

During the same period, flights to other Asian destinations by the two major Korean airlines have been falling from 56.5 percent in 2013 to 49.2 percent this year.

Jeju Air at the end of March reported its best performance with revenue amounting to 144.4 billion won and an operating profit of 21.6 billion won.

Korean Air, the country’s No. 1 carrier reported an operating profit of 395 billion won last year while Asiana enjoyed 98.1 billion won. But competition from LCCs is becoming a threat to the bottom line.

Other than the five domestic LCCs there are 20 foreign budget airlines in businesses in Korea. There are five additional LCCs preparing to enter the Korean market.

The challenges from budget airlines are forcing bigger airliners to make changes.

Since February, Korean Air has offered special discounts on flights to Jeju even during the high seasons and weekends. Previously, they were only offered on weekdays and in the low travel seasons.

For a year, Asiana has been promoting early bird tickets, which offer discounts for booking in advance.

The airline industry has been using collaborations with social commerce companies including Coupang and Tmon to provide low price tickets to consumers since the beginning of this year. That is one of Korean Air and Asiana’s strategies to compete against LCCs.

The airlines are also purchasing more mid- to short-range aircraft.

On June 16, Korean Air made a major announcement at the air show in Paris that it was purchasing 100 planes from both Boeing and Airbus.

Among the planes purchased was Boeing’s B737MAX-8 and the Airbus A321NEO. These are mid- to short-range planes with maximum flight distances of between 5,634 kilometers and 5,904 kilometers.

Asiana also decided to buy 25 units of the A321NEO. Some see this as a defense strategy against LCCs, which have been eating into Korean Air and Asiana’s mid to short range flights.

“Purchasing large numbers of the same plane not only lowers the purchasing price but also saves operating costs, which allows more flexibility in managing flight routes,” said a Korean Air official. “We plan to manage our routes with better services and competitive prices to compete against LCCs.”

Experts, however, say for bigger airlines to truly compete with the budget carriers, they need to fix inefficient flight routes and their own high salary structures.

“The major airliners’ real failing is that they send planes to destinations that attract only a few passengers so they can maintain their rights to those routes,” said Huh Hee-young, business management professor at Korea Aviation University.

“They need to learn from LCCs that manage routes flexibly and add non-regular flights for major holidays in May and the summer vacation season.”