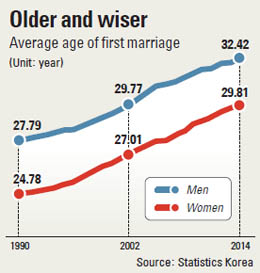 The low birth rate has been a worry for South Korea for more than a decade. While the government has put most of its efforts into encouraging couples to have kids, mostly through day care policies, it hasn’t done much to persuade more couples to tie the knot in the first place.

Koreans are getting married later than ever, and many are even choosing to stay single. That has an enormous impact on the birth rate.

South Korea’s total fertility rate, the average number of children born to a woman over her lifetime, fell from 2.82 in 1980 to 1.3 in 2001. It declined further to 1.08 in 2005, making it the world’s third lowest, behind Hong Kong and Macao. Despite the government’s efforts, it only recovered to 1.21 as of last year.

If the average couple has fewer than two children, they are not replacing themselves before they die, and the country’s population is bound to steadily shrink.

Mr. Choi, a 33-year-old in-house attorney at a mid-sized company in Gangnam District, southern Seoul, says he is not planning to get married anytime in the near future.

“I started my career far later than other people because I had to study for the bar exam,” Choi said. “If I get married and have a child, my social life ends right there.

“I’ll consider marriage only after I turn 37 and after I have a firmer place in society.”

For men, marriage offers a chance at connubial bliss but comes with guaranteed sticker shock. A deeply rooted Korean custom says the groom has to pay more than the bride for the cost of getting married, including a residence for the couple to move into.

While money issues may put men off marriage, women have a trickier dilemma: finding a guy with good prospects.

“Normally, women look for men with a notch better qualifications than they have themselves, which include education levels and jobs,” said Yun Hee-suk, director of the Department of Public Finance and Social Policy at Korea Development Institute.

“But as women have become better educated in recent years, it only becomes more difficult for them to find the kind of spouse they desire.”

The Korea Women’s Development Institute surveyed 750 unwed women in 2010. It found that 33.6 percent of women with high school educations were single, while the ratio climbed to 58 percent for college or university graduates and 67.9 percent for women with masters or doctoral degrees.

“Women are increasingly hoping to learn more and get recognized in the society,” Sookmyung University’s Kim, who conducted the study, said. “It leads to late marriages and a lower birth rate.”

The JoongAng Ilbo, an affiliate of the Korea JoongAng Daily, conducted interviews from July 1 to 5 with 25 unwed people between the ages of 30 and 45. The interviews were conducted over the phone or social network chat services. Most identified financial challenges, particularly for housing or day care for kids, as the main reason for postponing getting wed.

“I once thought I’d get married once I meet the right person, but I couldn’t find him,” said Park, a 43-year-old female employee of a large company. “If I get married now, I don’t want to have any financial difficulties. And it’s not easy to find a man who makes that much.”

About 70 percent of the budget the government earmarked to help raise the birth rate over the past 10 years was dedicated to day care.

“The birth rate won’t be affected by day care policies if people are putting off or avoiding getting married entirely,” Yun said. “The government needs to deal with the bottleneck of marriage first.”

After the country’s total fertility rate hit 1.08 in 2005, a presidential committee on the low birth rate and Korea’s aging society was formed, and it proposed five-year plans. Despite 150 trillion won spent over the last 10 years, the total fertility rate merely increased to 1.21 last year.

In 2008, the Lee Myung-bak government downgraded the committee by putting it under the Ministry of Health and Welfare, although at the end of his term, Lee restored it as a presidential committee. But the restored committee never held a meeting. President Park Geun-hye abandoned the committee until last February, when she formed a fourth committee. It met and wrote another five-year plan to raise the birth rate between 2016 and 2020.

Analysts say the government is concentrating on day care policies to address the low birth rate and aging society issues because the health ministry is in charge. They say more comprehensive thinking is required on the state of Korean marriages and how to ensure women can keep their jobs, even after having children.

“When birth control policies were successful in the 60s and 70s, it was because the Economic Planning Board, which has budgetary authority, took the lead and demanded cooperation from ministries and local governments,” said Choi Jong-chan, director of the National Strategy Institute. “It is difficult for the Ministry of Health and Welfare to come up with comprehensive measures on its own and also become a driving force.”

Marriage is the first obstacle, analysts say, and it should be examined from a financial perspective.

“A rapid rise in housing expenses is the primary obstacle for a newly married couple,” said Kim Dong-won, a visiting professor of economics at Korea University. “The government should build rental housing projects with a pleasant living environment on some leftover lands and let couples save money.”

Employment is also a big factor in whether Koreans wed.

“I’m maintaining my student status by postponing my graduation thesis,” said 27-year-old Kwon, who currently works as an intern at a midsize company. “I’m still a university student until I get a job. How could I possibly get married soon?”

Marriage traditions are getting in the way of some couples tying the knot.

“About 20 to 30 percent of couples are calling off marriages because of conflicts between families over houses, furnishings, economic backgrounds of each family and so on,” said Son Dong-gyu, president of wedding consultants Bien Aller. “We should carry out a campaign to change the notion that men should have better educational background or jobs than women, and that they have to be older, too.”