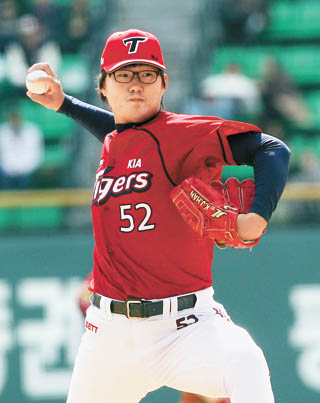 On Thursday, Kia Tigers fans at the Gwangju-Kia Champions Field applauded loudly when Han Ki-joo took the mound during the eighth inning of the game against the LG Twins.

Han was making his first pitch in the Korea Baseball Organization (KBO) League since Aug. 16, 2012.

In his one inning, the 28-year-old right hander allowed a single, but was able to close in just 12 pitches with one strikeout.

After graduating Dongsung High School in Gwangju, Han joined the Tigers, his hometown club, in 2006 with a 1 billion-won ($865,000) signing bonus - still the highest deal for a rookie in KBO history. But injury has spoiled his career. Starting with an elbow surgery in 2009, Han didn’t play a single game in 2010.

He played only 32 games from 2011 to 2012, going only 2-4 with 14 saves, and has since spent most of his time undergoing rehabilitation for finger and shoulder surgeries.